—After the painting by David Chorlton 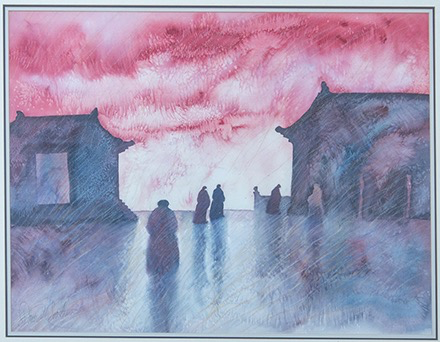 A Chinese Court by David Chorlton

Painting copyrighted © by the artist. All rights reserved.
Appears here with his permission.

Image above is a photograph (© 2022) by Gary S. Rosin of the framed, matted painting, with antireflective glass (frame not shown). The painting is part of Rosin’s personal collection. Photograph appears here with his permission.

is a poet, painter, and photographer who was born in Austria but grew up in Manchester, close to rain and the northern English industrial zone. In his early 20s he returned to Vienna, from which he enjoyed many trips around Europe to enjoy and paint its landscapes and towns.

In 1978, he moved from Vienna, Austria with his wife to Phoenix, Arizona, where his fascination with the desert and wildlife grew, along with his interest in writing poetry. His poems often reflect his affection for the natural world, as well as occasional bewilderment at aspects of human behavior. His poetry and paintings have appeared in more than 200 publications online and in print. He likes to see his poems in unexpected places, and one of them is interred, with desert legume seeds from Boyce Thompson Arboretum (Superior, Arizona), in the Global Seed Vault in Svalbard, Norway.

Chorlton is the author of more than a dozen books and chapbooks, most recently a collection of his watercolors and poems, The Inner Mountain (Cholla Needles Press, 2022); a long poem, Speech Scroll (Cholla Needles Press, 2020); Reading T. S. Eliot to a Bird (Hoot ’n Waddle, 2018); and Bird on a Wire (Presa Press, 2017). The Bitter Oleander Press published in 2017 his translation of poems by Austrian poet Christine Lavant, Shatter the Bell in My Ear. His books, A Field Guide to Fire (2015), Selected Poems (2014), and The Devil’s Sonata (2012) were published by FutureCycle Press.

As much as he loves Arizona and the Southwest, he has strong memories of Vienna, and that city is the setting for his one work of fiction: The Taste of Fog (Rain Mountain Press, 2011).

Aside from writing and painting, Chorlton enjoys watching birds and editing the quarterly publication of his local Audubon Society chapter. He often reads a poem for Maricopa Audubon meetings, and one of his poems appears in the British Museum’s anthology, Birds.

⚡ Indecision and three other poems in Softblow

⚡ The Crossing and In Line, two paintings in Poppy Road Review (9 March 2014)