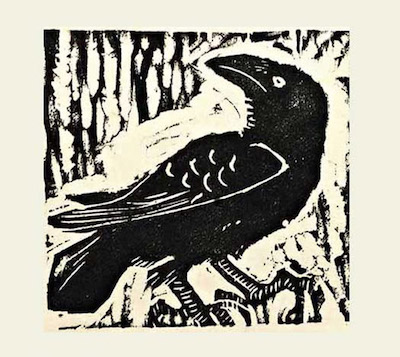 Additional details about this woodcut are available at: Antiques Boutique

3. Image of woodblock print by Andrew Waddington was found at Ainscough Contemporary Art and appears here with his permission.

A few of Waddington’s artworks are featured at his website, https://www.andrewwaddington.co.uk/, and hundreds more may be found on Instagram.

established his print studio on a farm near Rose, Cornwall [England, UK] in 1988, then known as The Hendra Press, and the editions of woodcuts were printed on a hundred-year-old Harrild and Sons book press. In 1992, The Hendra Press became St. Indract Press, to reflect its new home above the Tamar valley on the Devon/Cornwall border.

The Harrild book press has been replaced by a Norup Relief Press and the editioning of prints has improved since the early days of the studio, but the spirit of the early woodcuts continues in the free-flowing cutting of the woodblocks which capture the liveliness of the animals and birds depicted. The woodcuts are printed on fine handmade Japanese papers with a border large enough to mount or “float” the print. [Source: Ainscough Contemporary Art, https://www.acag.co.uk/andrew-waddington-biography/ ]

⚡ Lawful and Proper, poem by Jonathan Yungkans in Rise Up Review (Fall 2020)