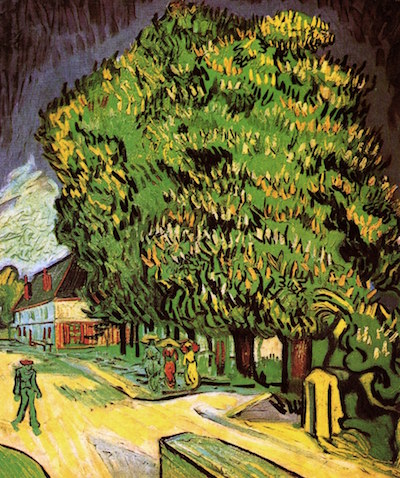 I waited near the canvas until the guard was looking away and I was able to slip in between the women walking under the blooming green and yellow chestnut trees in Van Gogh’s painting. That’s me there in the red dress, tagging along. The darkness stands at bay in a wood or park corner, and is that a cloud? Oh, France! Oh, my beloved! These are, let’s say, patchy yellow and green painted streets under the yellow and white flowers, and a woman in a yellow dress and a woman in a green dress (green that almost disappears in the verdant growth). Trees accumulate to fill the vision, a cloud of green leafage swelling as if (and were there time) they would consume the picture. And a green man is coming along! He’s wearing a red beret. He could be leaving the restaurant with its many reds (doors and gutters and chimneys) and the women are going in that direction. I’m eager to eat something, so I’m hurrying along in my red dress with the women in their yellow and green dresses, dresses the color of the trees and the roads. With the green man comes a story, perhaps, of an awkward intrusion, menacing the green and yellow French day. Is he watching the women? My dress is the color of the stranger’s beret, and the chimneys, of course.

Chestnut Trees in Blossom (oil on canvas, 1890; Auvers-sur-Oise) by Vincent van Gogh (1853–1890) resides in a private collection in South America. Image above was downloaded from art-vanGogh.com (July 2021).

is a retired university professor of political theory who lives in Old Saybrook, Connecticut with his wife, Ann Knickerbocker (an abstract painter), and a Standard Poodle named Nikki. He is the author of three books of prosimetra published by KYSO Flash Press: Touching Fire: New and Selected Ekphrastic Prosimetra (2018), Get Up and Dance (2019), and Carmody & Blight: The Dialogues (2019).

His most recent book, Peaches and Roses: Episodes in the Navajo Degradation, was released in January 2021 by Silver Bow Publishing (New Westminster, British Columbia). He also has a poetry e-chapbook published in the 2River series, La Vida de Piedra y de Palabra: Improvisations on Pablo Neruda’s Macchu Picchu; an experimental prosimetrum in Lacuna entitled Five Episodes in the Navajo Degradation; “The Rock in a Jar,” an extended prose poem in several parts in Gone Law 32; and “The Turn of Art,” a short prosimetrical drama pitting Picasso against Matisse, in Fiction International.

⚡ Artifact With Steam (2019) by Ann Knickerbocker, ekphrastic tanka prose in the e-collection Get Up and Dance featured in KYSO Flash (Issue 12, Summer 2019)