Intro: MacQ is for Quilts

A few months ago, just before Thanksgiving, my beloved friend Alexis Rhone Fancher, an accomplished photographer, poet, and editor, sent me a link she thought I might find interesting, and indeed her intuition was spot on. The link to “Cosmic Threads” (included below) proved to be an enriching gift that inspired me to delve into an artform I had long overlooked. An unintentional oversight, but mea culpa even so.

This fascinating article by Maria Popova, “Cosmic Threads: A Solar System Quilt from 1876” (Brain Pickings, 6 December 2018), features a pedagogical quilt by Ellen Harding Baker (1847–1886), a science teacher in rural Iowa who “spent seven years crafting in order to teach women astronomy long before they/we had access to formal education.” Popova calls this visual aid “a serenade to the Universe in silk and wool”: 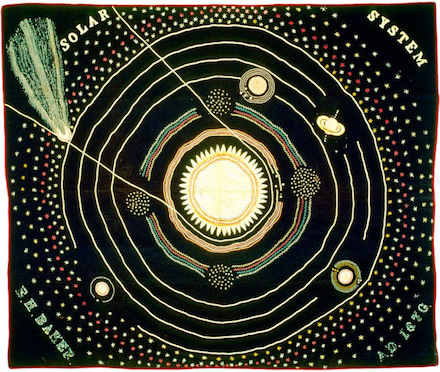 Historical and descriptive details are available at the
National Museum of American History, where this quilt resides.


Baker’s inspiring story and celestial quilt captivated me. Of course I shared my delight and gratitude with Alexis. And I happened to mention the quilt I’ve carried with me for decades and during numerous cross-country moves, a colorful relic comprised of more than 400 individual squares of scrap fabric that my maternal grandmother stitched together for me the year of my birth: 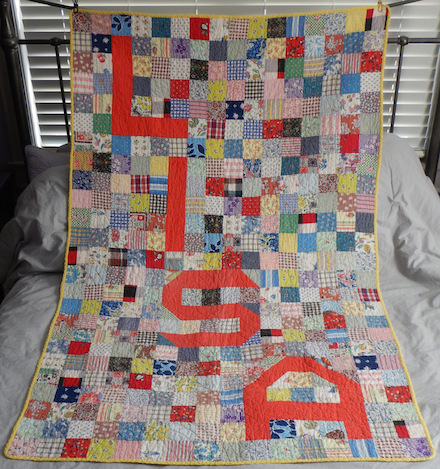 Snapshot © 2021 by Cindy L. Sheppard.
Published here with her permission.


Alexis revealed in turn that she had created several quilts for her son, Joshua, when he was a baby 40 years ago. Like this one, her second, which includes hand-painted fabrics: 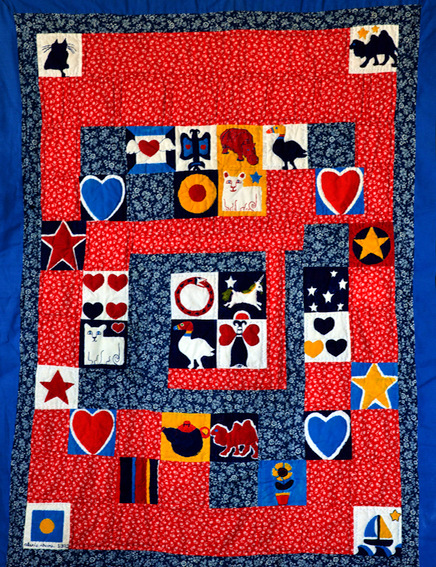 Quilt and photograph © by Alexis Rhone Fancher.
All rights reserved. Published here with her permission.


A few years before Joshua’s untimely death of cancer at 26 years old, his father had also died young, leaving this king-sized antique quilt from his maternal grandmother’s family in Alexis’s care: 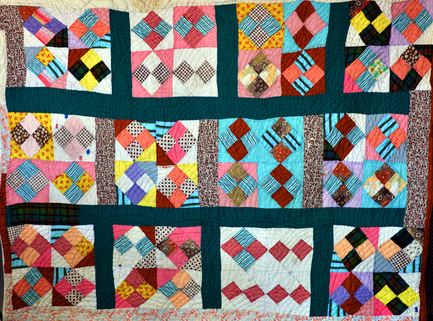 Photograph © 2021 by Alexis Rhone Fancher.
All rights reserved. Published here with her permission.


These images and stories were compelling, and prompted me to learn more about the craft and art of quilting. After putting books on hold at the county library, I whiled away the days waiting for their arrival by rooting around online for hours on end at my computer, willingly sliding down rabbit holes to see where serendipity might lead me.

Along the way, I discovered that quilting—i.e., the practice of stitching together, in patterned rows or other designs, two or more layers of fabric and padding, for utilitarian as well as artistic purposes including bed linens, clothing, and decorative art—has likely existed since ancient times.

A carving in the British Museum, The Ivory King (circa 3100–2890 BCE, possibly from the First Dynasty in Egypt), appears to depict an aging king wearing a mantle or cloak that looks to be quilted “with a design of diamond shapes bordered by two bands of guilloche....”

Discovered in the Temple of Osiris at Abydos, Egypt (1903)

(For more details, see Ivory statuette of a king in jubilee robe.)


This journal’s name, MacQueen’s Quinterly, might be a tip-off that I have a quirky fondness for Q words. And “quilt” simply sounds cool to my ear. A fine old word, its first usage may have been in 13th-century England, and derives from the Latin “culcita,” meaning mattress or cushion, and the Old French “cuilte.” (Sources: Victoria and Albert Museum in London, UK; and Google’s English Dictionary provided by Oxford Languages.)

Fittingly enough, the oldest known quilt in existence is medieval, dating to the late 14th century, and may have been created by Sicilian artisans for a 1395 wedding within the Guicciardini family of the Florentine oligarchy. Known as the Sicilian Tristan Quilt, it depicts more than a dozen scenes from the story of Tristan and Isolde, which was a favorite narrative of the Middle Ages: 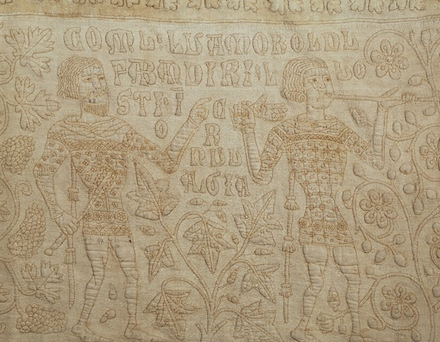 Image downloaded from the public domain via Wikipedia.
Object records with comprehensive details are available at:
Victoria and Albert Museum and Textile Research Center.

A collaboration conceived in 1985 to commemorate the lives of those who have died from AIDS-related causes, the quilt has grown to a heart-breaking size of 54 tons, comprising more than 48,000 individual three-foot-by-six-foot panels sewn together and representing more than 100,000 people—making it “the largest piece of community folk art in the world as of 2020.” This monumental memorial “is now warehoused in San Francisco when not being displayed and continues to grow....” (Sources: Wikipedia and the National AIDS Memorial.) 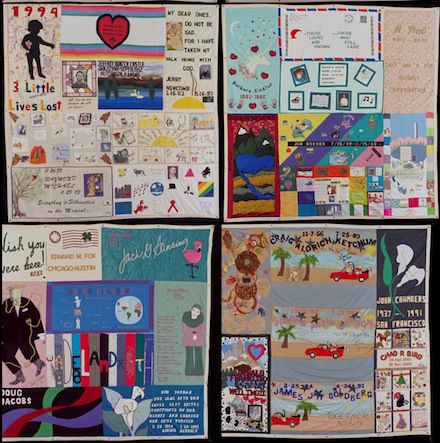 You Can Now Explore All 48,000 Panels of the AIDS Memorial Quilt Online (Smithsonian Magazine, 21 July 2020)


The annual exhibition scheduled for April last year was postponed during the pandemic lockdown, and volunteers who would have sewn panels together for The AIDS Quilt began making hundreds of face masks instead [Thomson Reuters Foundation: News (14 April 2020)].

In the UK and USA last year, sales of fabrics doubled and threads and yarns tripled, while sales of sewing machines increased sharply in those countries as well as in India and Australia, and even quadrupled in some parts of Canada. Folks were flocking to needle arts such as sewing, embroidery, knitting, and quilting—not only to cope with pandemic isolation, anxiety, and grief, but also to satisfy the desire to create beauty in the world during a time which has triggered the worst and the best of humanity.

My plan: to continue exploring fabric arts and to share my discoveries in future issues of MacQ by presenting traditional folk art as well as unconventional pieces by a range of textile artists. I’m honored and deeply grateful to commence our Quilting Series with the photographs contributed above by my Muse on this project, Alexis Rhone Fancher, and with the following photo-essay by Jan S. Rosin, Featured Artist here in MacQ-7:

⚡ Quilting: A Form of Meditation [six quilts and commentaries]