Long after my mother’s death, her white orchid still thrives. Perhaps its bamboo stalks provide something more than decoration. Were they the healing supplement I had missed that day in the pharmacy as I searched the shelves for an elixir that would save her?

I remember sweeping dozens of pill bottles into a cardboard box and carting them to the precinct that accepts such things, and then destroys them. The desk sergeant seemed unconcerned. He didn’t want to hear about my attempts to prop up what couldn’t or wouldn’t sit up in bed. He wasn’t interested in the first broken hip, the second, or the years that separated them. He couldn’t care less about the rare day my mother remembered my name. And that one time in three years we had a real conversation. About the pattern for my wedding china. How I gave in to my then-husband’s choice: Royal Copenhagen Blue Flower Braided. The first compromise of many. Something I had forgotten for 30 years. And didn’t wish to remember.

I put down the dustpan and approach the round green pot. The white petals look exactly as they did when Mother’s lips kissed them goodbye. Perhaps she left a message. Buried deep within the petals. Waiting all these years for me to notice. I pin back my hair, bend my head, and gently place my ear against the orchid’s wide mouth. A voice rings out.

“You never should have given into him, not on the china, not on anything. But you did. And look where it’s gotten you. Look at yourself. Just look.”

Epigraph is from Claude McKay’s poem After the Winter, first published in his book Harlem Shadows (Harcourt, Brace & Company, 1922).

An Orchid (1941; pastel on paper mounted on board) by Georgia O’Keeffe may be viewed online at: Museum of Modern Art.

Blue Flower was a signature pattern of hand-painted porcelain created in 1779 by Royal Copenhagen; after hand-producing a range of products with the pattern for 200 years, the company discontinued it. “Braided” refers to the textured design on certain items, such as the rim of the soup tureen shown in the example below. (Other designs include fluted and angular; more details available at RC: Patterns.) 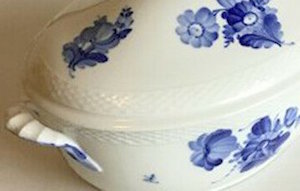 (Posted to eBay by Danam Antik)

Ms. Beary lives in the west of Ireland with her husband, Frank Stella, and tweets her photoku and micro-poetry on Twitter [at] shortpoemz.

⚡ Tiny Love Stories in The New York Times (8 January 2019); scroll five stories down the page for Roberta Beary’s “Now It’s All Fresh Fish” and her photograph of lobster traps in Clew Bay, Ireland.