—after Ophelia by John Everett Millais

Buoyed by her dress, she barely breaks the water’s surface—arms outstretched, palms upturned. Pansies float above her skirt. There are daisies on the glassy stream, and, there (to the left, above her head), a bird on the pollard from which she jumped or fell. Broken willow, broken bough.

And just perhaps, as Hamlet’s mother said, she’s still alive and singing—see, her mouth is open, and her eyes; and just perhaps, she doesn’t know how close to death she is—or why this painting makes me think of you. Your death was not offstage the way Ophelia’s was (the ladder placed, the rope around your neck); nor was the way you parted from yourself, the silent swinging—only air beneath your feet.

—Published previously in Life and Legends: The Essence of Warriorship (30 June 2016); appears here with author’s permission 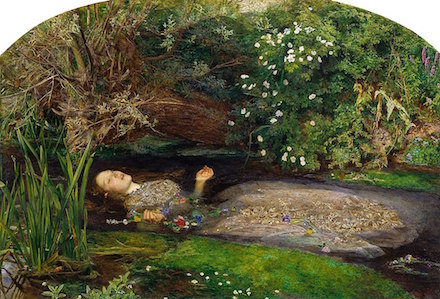 Painting is in the public domain, and image above was downloaded from Wikimedia:
https://commons.wikimedia.org/wiki/Category:Ophelia_(painting)

is the author of 25 books and chapbooks (poetry and nonfiction). Her poems, reviews, and articles have been published in journals, books, and anthologies worldwide. Among other awards, she has received poetry fellowships from the NJ State Arts Council, a first place Merit Book Award, a Writer’s Digest Award, a Merton Poetry of the Sacred Award, and Kean University’s Distinguished Alumni Award. Her book A Lightness, A Thirst, or Nothing at All (prose poems, 2015) was a Paterson Poetry Prize Finalist. Her most recent book, Wind Over Stones (2019), is a collection of ekphrastic prose poems with QR codes that link to images of the paintings that inspired them.

Founding director of the Carriage House Poetry Series and poetry editor of Tiferet Journal, Ms. Kenny has read in the US, England, Ireland, and France, and has twice been a Geraldine R. Dodge Festival poet.

⚡ “Different Paths Up the Same Mountain”: An Interview with Adele Kenny by Matthew Thorburn in The Ploughshares Blog (2 February 2016)