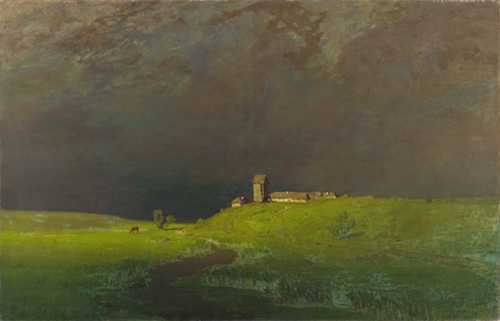 After the Rain (painting, oil on canvas; 1872) by Arkhip Ivanovich Kuindzhi (1842–1910) is reproduced above from Wikimedia Commons (link retrieved in September 2020).

For more information, as well as additional paintings by Kuindzhi, see also:
https://arthur.io/art/arkhip-kuindzhi/after-the-rain?crtr=1

shelters in place in Southern California, where she’s been putting the finishing touches on four new manuscripts, which are currently looking for a home. She is the author of four books of poems, including an ekphrastic chapbook, Balance (White Violet, 2012) and three collections: Narrow Bridge (Main Street Rag, 2019), Other-Wise (Kelsay, 2017), and A Likely Story (Moon Tide, 2014). Her poetry, reviews, articles, and essays have been published widely.

She has also edited a print anthology, The Liberal Media Made Me Do It! Poetic Responses to NPR & PBS Stories (Nine Toes Press, 2014); an e-anthology of ekphrastic poetry, Over the Moon: Birds, Beasts, and Trees (Celebrating the Photographs of Beth Moon), which was published online in 2016 as a special edition of Poemeleon Journal; and a new ekphrastic anthology which has yet to be published.