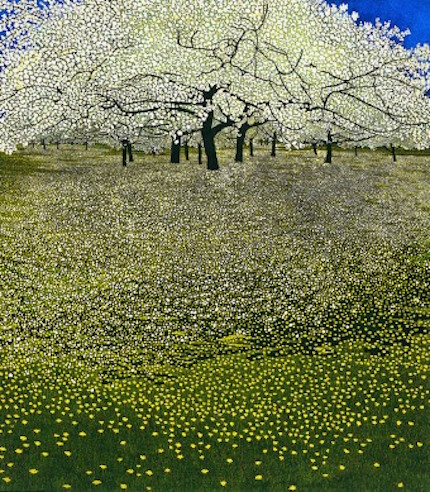 —From Crossing Borders: Ekphrastic Poems and Collaborations, Robbi Nester’s full-length collection of 34 ekphrastic writings, with an introduction by the author and 29 artworks by numerous visual artists; this book is available for publication.

is the author of four books of poems, including a chapbook, Balance (White Violet, 2012) and three collections: A Likely Story (Moon Tide, 2014), Other-Wise (Kelsay, 2017), and Narrow Bridge (Main Street Rag, 2019). Her poetry, reviews, articles, and essays have been published widely.

She has also edited a print anthology, The Liberal Media Made Me Do It! Poetic Responses to NPR & PBS Stories (Nine Toes Press, 2014), and an e-anthology of ekphrastic poetry, Over the Moon: Birds, Beasts, and Trees (Celebrating the Photographs of Beth Moon), which was published online in 2016 as a special edition of Poemeleon Journal.

was born in 1943 in Dolgellau, North Wales and now lives in Kent. Since 1971, he has been a professional artist and printmaker. A regular exhibitor at the Royal Academy and the Bankside Gallery (home of The Royal Society of Painter-Etchers), he has also exhibited in Europe, Canada, New Zealand, the USA, and Japan. His work is held in many private and public collections, including the Tate Gallery, Arts Council, British Council, Greenwich Museum, Edinburgh Education Authority, Liverpool University, and Loughborough College of Education. He was elected a Fellow of the Royal Society of Painter-Etchers in 1982.

Greenwood’s work has been used by the National Trust and has appeared in books such as the Encyclopedia of Printing, in articles and front-cover illustrations for Leisure Painter, on greeting cards (Unicef and H. Ling) and CDs (Deutsche Grammophon), and on the 1995 Sanyo company calendar.

Greenwood now works mainly on copper plates. His work is economical in that he typically uses only two plates and two or three colours to achieve a great range of tone and colour by the depth of the etch and by overprinting and fusing one colour with another. His images do not always relate to a specific place—he works from an atmospheric amalgamation of ideas recalled.