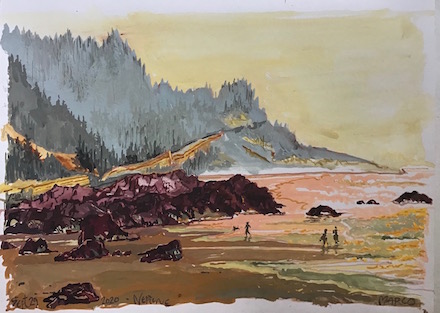 As the artist described this painting in an email to me (dated 8 October 2020): “The colors were highly unusual and quite inspiring.... I was reminded of the palette of the great master Pierre Bonnard.”

For me, this image is both beautiful and heart-breaking; and, having recently experienced here in Oregon what seemed like apocalyptic smoke-and-ash-filled skies for days on end, I marvel that the artist has captured the eerie colors and atmosphere of the climate crisis so well in a plein-air sketch. Seems almost magical.

However, MaRco had no agenda other than his own aesthetic pleasure when he created this remarkable artwork. It was during a late-September camping trip with his wife and fellow painter, Joann Carrabbio, to the Oregon coast, about 70 miles west of their home in Eugene. “When I painted this,” he wrote in a subsequent email to me (9 October), “I had no idea that the surreal atmosphere was due to smoke. It could have been haze mixed with fog from the ocean. I found out later in the day (when we had internet reception) that the air quality was bad due to smoke from fires.” Neither he nor Joann had smelled smoke.

He wrote further that, while painting, “I wasn’t trying to make any statement about climate chaos or any other issue.” Instead, with a child-like astonishment, he was “very happy to find the wide range of moods provided by the coast....”

(Painting and quotations appear here with the artist’s permission.)

is a resistance artist and author who grew up in the foothills of the southern Mediterranean Alps and attended the École Nationale des Beaux Arts in Paris. As a young man, he spent time traveling in several Asian countries, Mexico, and North Africa. He always brought along sketchbooks in his pack. After settling in southern France, he was awarded art commissions for street murals, created a body of plein air paintings, and often made ends meet as a graphic artist/illustrator and by doing manual jobs, most notably as an apprentice stonemason restoring a medieval castle in the Haut Var.

⚡ Coping: Stir crazy from being stuck in Covid-19 quarantine? Take a trip through the eyes of artist Marco Elliott, an art profile by Randi Bjornstad in Eugene Scene (30 March 2020)