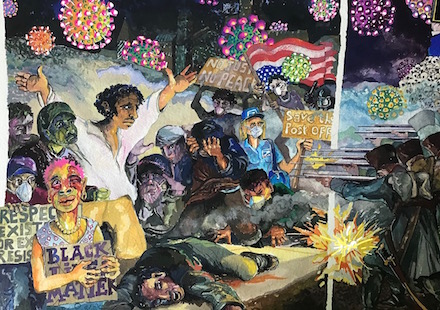 By the Rockets’ Red Glare
(An homage to Francisco Goya)
Gouache and watercolor on paper, summer 2020 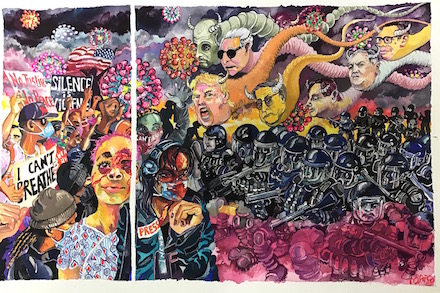 Charge of the Demon Sperm 2
Gouache and watercolor on paper, summer 2020

Detail from Charge of the Demon Sperm
Gouache and watercolor on paper, summer 2020

—American Carnage was first published in the October 2020 issue of Free for All News in Eugene, Oregon. Images above and the Artist Commentary below appear here with Elliott’s permission.

Commentary: The Artist as Canary in the Coal Mine

(Preface: The first two images above depict the events affecting people in Oregon at the end of summer, 2020. And the third one, Charge of the Demon Sperm, is a tongue-in-cheek joke about one of the 10,000 wacky things that Donald Trump has uttered.2 I just couldn’t resist turning it into derision.)

These are from a series of some 14 pieces so far, a visual diary of sorts, with the purpose of documenting my daily feelings, the angst and the anger, during the COVID-19 confinement and the more recent “super confinement” during the wildfires—my own neurotic little theater to while away the worst of the Dark Days of 2020.3

To illustrate how I perceived this period, I am sharing a quotation by Bertolt Brecht, the renowned playwright who fled Germany to escape the persecution of the rising fascist regime and came to the United States then as a political refugee:

When the houses of the great collapse
Many little people are slain.
Those who had no share in the fortunes of the mighty
Often have a share in their misfortune.4

What kind of times are these when
Talking about trees (and trees burning*) is almost a crime
Because it encompasses silence about so many atrocities...5

(*my tweak, with apologies to Brecht!)

Too little has been said, especially in the mainstream media, about the link between these fires that have devastated the West, our recent plague, and a rapidly warming climate. (Not to mention gender-reveal parties.)

2. Refers to Donald Trump’s reaction to medical conspiracy theorist Dr. Stella Immanuel, who has claimed that some gynecological conditions are caused by demonic sperm transmitted to people having sex with demons in their dreams, that alien DNA is used in certain medical treatments, and that facial masks are not necessary since she has cured hundreds of COVID-19 patients with hydroxychloroquine.

When asked why he would trust someone with such views, Trump said that Immanuel was a “very respected” doctor and “spectacular” in her statements. “...I thought she was very impressive.... I thought her voice was an important voice, but I know nothing about her.”

3. “Super confinement” refers in part to a 10-day period beginning on Labor Day 2020, during which residents in cities up and down western Oregon and the coast were forced to stay indoors due to extremely hazardous air quality, above 500 on the AQI for days on end. The skies looked apocalyptic, filled with falling ash and dense smoke from several wildfires burning in eastern Oregon. Wildfires were also burning in Washington state with similar results.

Locally, the Holiday Farm Fire, whose western-most boundary lies roughly 12 miles east of the Eugene city limit, has burned more than 173,000 acres in the Willamette National Forest. Although 96% contained as of 11 October, the fire’s expected to burn 18 more days before crews achieve full containment. Air quality continues to fluctuate from poor to good depending in part on infrequent rain.

5. From a poem by Bertolt Brecht, “To Those Who Follow in Our Wake” (sometimes translated as “To Posterity”). The three lines above (with the exception of Elliott’s tweak) were translated from the German by Clare MacQueen.

The full text of the poem in German and English (translator, Scott Horton) appears in Harper’s Magazine (15 January 2008):
https://harpers.org/2008/01/brecht-to-those-who-follow-in-our-wake/

See also “Adrienne Rich Reads ‘What Kind of Times Are These?’” in Brain Pickings (January 2017):
https://www.brainpickings.org/2017/01/01/adrienne-rich-reads-what-kind-of-times-are-these/

is a resistance artist and author who grew up in the foothills of the southern Mediterranean Alps and attended the École Nationale des Beaux Arts in Paris. As a young man, he spent time traveling in several Asian countries, Mexico, and North Africa. He always brought along sketchbooks in his pack. After settling in southern France, he was awarded art commissions for street murals, created a body of plein air paintings, and often made ends meet as a graphic artist/illustrator and by doing manual jobs, most notably as an apprentice stonemason restoring a medieval castle in the Haut Var.

⚡ Coping: Stir crazy from being stuck in Covid-19 quarantine? Take a trip through the eyes of artist Marco Elliott, an art profile by Randi Bjornstad in Eugene Scene (30 March 2020)