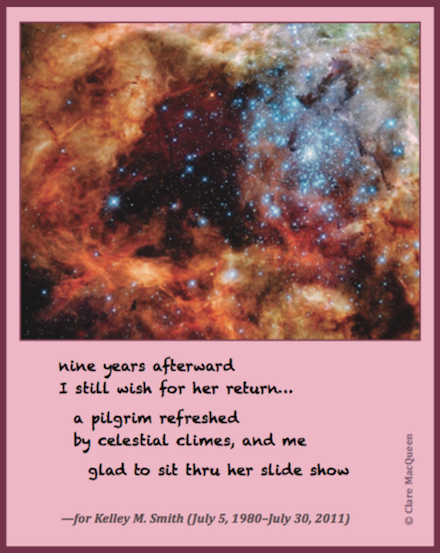 
nine years afterward
I still wish for her return...
a pilgrim refreshed
by celestial climes, and me
glad to sit thru her slide show 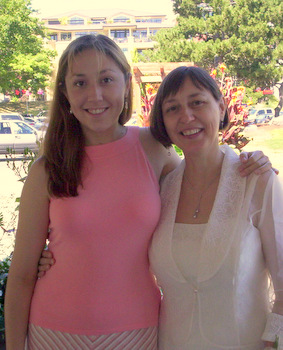 The photograph within the taiga is reproduced from the public domain and shows Stellar Grouping R136 in the 30 Doradus Nebula as observed through the Hubble Space Telescope in October 2009.

“The blue color is light from the hottest, most massive stars; the green from the glow of oxygen; and the red from fluorescing hydrogen.” Read more, and see the original photograph in all its magnificence, in “Hubble Views Grand Star-Forming Region” (8 March 2012) at the NASA website; link retrieved in June 2020:
https://www.nasa.gov/multimedia/imagegallery/image_feature_2193.html

is founding editor and publisher of MacQueen’s Quinterly and its predecessor literary and arts journal, KYSO Flash; and she served as webmaster and associate editor for Serving House Journal from its inception in January 2010 through its retirement in May 2018, after publishing 18 issues. She is among the co-editors of Steve Kowit: This Unspeakably Marvelous Life (Serving House Books, 2015), and the editor, designer, and publisher of 20 books for her KYSO Flash micro-press.

MacQueen serves on the Senior General Advisory Board for The Best Small Fictions, published by Sonder Press in 2019 (and Braddock Avenue Books in 2018 and 2017). For the 2016 edition, published by Queen’s Ferry Press, she served as Assistant Editor, Domestic.

Her reviews appear in KYSO Flash, MacQueen’s Quinterly, and Serving House Journal; her short fiction, nonfiction, and poetry have been published in Firstdraft, Bricolage, New Flash Fiction Review, Serving House Journal, and Skylark, among others; and her essays are anthologized in Best New Writing 2007 and Winter Tales II: Women on the Art of Aging (Serving House Books, 2012).

⚡ “No Succinct Summary Will Do Them Justice” in MacQueen’s Quinterly (Issue 2, March 2020), a review by Clare MacQueen of A Cast-Iron Aeroplane That Can Actually Fly: Commentaries From 80 American Poets on Their Prose Poetry edited by Peter Johnson

⚡ Clan Apis: A “Comic Book” by Jay Hostler, MacQueen’s review of the remarkable, genre-bending, award-winning book in Beelines (July 2013, pg. 8); also appearing on page 8 of that issue, photos of her former bees feeding on honey