In So Many Words 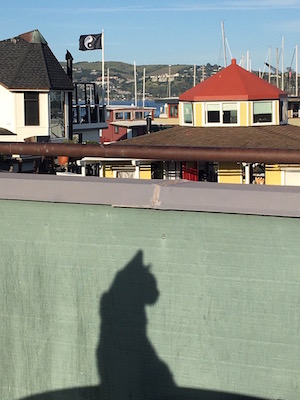 
“You’re in for a hard rewrite,” says Pierre the Cat.

“Metaphorically?” I ask. “Like with this poem? Or life?”

For clarification he walks across my chest. Licks my earlobe with his sandpaper tongue, his paw catching on my flannel. As if that’s supposed to answer my question, clear things up.

It’s part of his craft, his editor’s technique. “Why so many words?” he says, but it’s not a question. He takes his time extricating himself from me pinned in my favorite chair, coffee cup just out of reach. Then, with the pen, he settles across my journal and typed first draft. When Pierre pulls out the pink fine point, adverbs tremble and adjectives pray.

I’ve hidden the red, can you imagine?

“You want to talk about craft,” he says, “try writing without any words, without paper. Try living next door to a beginning sax player who doesn’t know the meaning of not playing.”

“Let's be clear on this. If rewriting is getting to know yourself all over again, then let me introduce the two of you...” He yawns.

Pierre has lost all vestiges of his feral origins. But he’s a tough-as-nails editor. He leaves the manuscript and hops back on top of me, licks his other paw, then his chest, then starts to lick himself down, reaching places I never dreamed of.

He stares at me. Who knows what he sees. Those yellow eyes speaking truth. Wordless. That 60-grit tongue rounding odd corners, applying a smooth, fine finish. Showing me how it’s done.

“Can I at least refill my coffee cup?” I ask, down to one free hand, my torso under siege. Not a big cat, a dainty killer in fact, Pierre somehow grows heavy on you. His purring, I take as a no.

Pinned by exponential weight, with his whiskers brushing against my cheek and tickling, I know better than to laugh. His sudden dismounts are 4-claw affairs, and sometimes draw blood—editor’s red he calls it, his personal copyediting marks.

“Craft is physical. Catnip is for later. Eating grass is the best way to purge, addition by subtraction. And purge you must,” he says, eyeing my manuscript, my words, as he moves to the Asian rug and flexes his claws.

“Keep your claws sharp,” commands Pierre. “Know when to stop. Work on your indifference. Don’t just kill your little darlings as your beloved Faulkner once said. Have a little fun with them, bat them around—scare the precious shit out of them.”

Pierre gazes out the window, his back to me. Who knows what he sees. “I once wrote a story,” he says, “and it went like this: Pierre walked the streets of Catmandu. Dogs cowered in the shade. Pierre’s walking still. End of story.”

His tail flicks. “Every story, every dream, every poem I’ve written since has been the same, retold. Meaning is a shadow you can’t grasp.”

Pierre saunters into the kitchen. Leaps onto the counter. “Anything made smaller is better—tumors, hairballs, poems. Remember. Anything. Except breakfast. So,” he growls, “you got any King Salmon in the house, Writer?”

That too, is not a question. And so I rise. 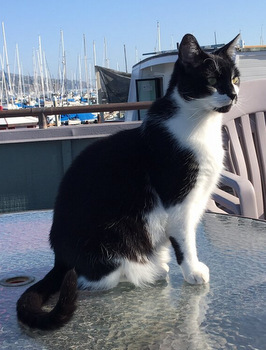 —Photographs above, Tao of Meow (3 May 2020) and Pierre at the Helm (3 December 2019), are reproduced here with author’s permission from his blog, This Day Afloat.

teaches “low fat fiction” and is the author of four collections of short prose: Edible Grace (KYSO Flash Press, 2019), Soundings and Fathoms: Stories (Finishing Line Press, 2018), House Samurai (Iota Press, 2006), and Parts & Labor (Thumbprint Press, 1992). His stories have appeared in dozens of venues including Carve, daCunha, Flashback Fiction, KYSO Flash, Sea Letter, Third Wednesday, and Exposition Review, where he was twice a Flash 405 winner. In 2018, his flash was nominated for the Best of the Net anthology.

Born in the Chihuahua desert near the Mexican border, Guy grew up on a stingray in Ventura, learned to write in the Peace Corps during a civil war in Guatemala, honed his craft pulling weeds and planting flowers as a gardener in San Francisco, and later received his M.A. from San Francisco State, where his teaching career began. He’s been a creative-writing midwife since 1991.

⚡ This Day Afloat: Reflections of Life on the Water, Biederman’s blog