No one is comforted by a surgeon who calls a scalpel a thingamajig,
or a gourmet chef who doesn’t know the difference between a terrine
(a casserole dish) and a tureen (a giant soup pot).
—Laurie E. Rozakis, in Vocabulary for Dummies1

Years ago, one of my teachers suggested that the difference between the professions—accountants, doctors, teachers, whatever—mostly comes down to vocabulary. Each job requires practitioners to master highly specific terminology to avoid confusion and do their work every day, which includes communicating with a range of people from fellow professionals to clients to ordinary citizens.

For instance, a doctor might be a gastroenterologist, neurosurgeon, or one of a hundred other specialists. If you specialize in gallbladders, you must be able to identify cholecystitis (inflammation of the gallbladder) via cholescintigraphy (a gallbladder scan) or by performing a delicate surgical procedure called ERCP, short for endoscopic retrograde cholangiopancreatography.

Still, I concede that skill is more important when the scalpel meets the skin, but it’s not as much fun. I’m personally not interested in actually excising someone’s gallbladder.

All in all, the concept—that vocabulary defines and differentiates the professions—has an appealing, abstract truth. The world is experiencing four major crises, with each providing an advanced certificate in terminology for poets, writers, and other laypeople like me. I speak, of course, of the climate crisis, the impeachment of the U.S. president, the pandemic, and the uprising following the murder of George Floyd. Most of us have had to expand our vocabularies to talk about these developments and even to understand the news. In fact, our lives might depend on whether or not we use the right words to describe our symptoms, report something we witness, or purchase an effective product, let alone make solid judgments in exercising our democratic rights, or dismissing logical-sounding conspiracy theories.

First of all, what to call this existential phenomenon: global warming? anthropogenic climate change? climate emergency? climate chaos? I’ve settled on climate crisis because (1) it’s not just about warming or change, (2) emergency sounds like a single event, and (3) chaos conjures up total panic (seen now mostly in climate refugees).

While panic might be preferred over apathy, at this point, the climate crisis is primarily about gradual sea-level rise, seasonal superstorms, drought, floods, heat waves, wildlife extinction, regional food shortages, and that sense of foreboding we feel. Dozens of specialized terms such as the albedo effect, feedback loops, and the water cycle have also become commonplace. In geological terms, it’s happening fast, and I look for terminology that communicates the need for urgent action—urgent being, in the opinion of most climate scientists, 10 years.3 Unfortunately, 10 years may be too long in human terms to spark a drop-everything response. After all, your life from seventh grade, where you first learned about the birds and the bees, through college, where you might have dissected birds and bees, is 10 years. In other words, forever.

Naming the phenomenon is the easy part.4 Climate-crisis vocabulary includes a plethora of concepts and processes. Starting with greenhouse gases, or GHG, an omnibus term encompassing water vapor, methane, ozone, nitrous oxide, halocarbons, carbon dioxide, and just about anything we breathe. I took a year of college chemistry decades ago, but until recently couldn’t have explained why any of these greenhouse chemicals are worrisome, especially why climate change is largely a problem of methane and CO2, and why it’s not better for plants to have more of the latter. As for nitrous oxide and halocarbons, they don’t sound good, so I’ll blame them on runaway consumerism and unregulated capitalism. Skeptical Science links everything this way: “Human greenhouse gas emissions are causing global warming, which in turn is causing climate change.”5

Now, thanks to dozens of books, and hundreds of articles like those in Skeptical Science, I probably could hold a coherent conversation on the topic, if I had enough to smoke.

Same with impeachment. What did I know except that Nixon resigned before it happened to him, and Clinton was impeached but subsequently acquitted? Before the process began with Trump, I had forgotten that impeached merely means accused of high crimes and misdemeanors, not convicted and booted out. After watching many hours of court testimony and news coverage, I now feel pretty knowledgeable on the subject. Lawyerly terms roll off my tongue: “standard of proof” vs. “burden of proof,” and misdemeanor is a crime less felonious than felony. Then there’s the Emoluments Clause, and my favorite, suborn, from the Latin subornare, which means, “to secretly furnish or equip.” The president didn’t coerce Michael Cohen into lying. He encouraged him to lie, and Cohen obliged. “It’s what legal types call subornation of perjury” (Virginia Heffernan, The Los Angeles Times).6

Admittedly, I’m not sure if Trump actually committed treason, and I don’t think I could explain the difference between bribery and quid pro quo, but he’s probably guilty of both.7

Senators do know the difference, of course—most of them are lawyers—which is why I don’t understand how any of them could have voted not to proceed. From obstruction of congress to witness tampering to tax and insurance fraud, the man has clearly committed an abuse of power. I can only conclude that those Republican senators have sold their souls to share in the power surge. And nearly half of our fellow citizens caught the sickness. Which brings me to... 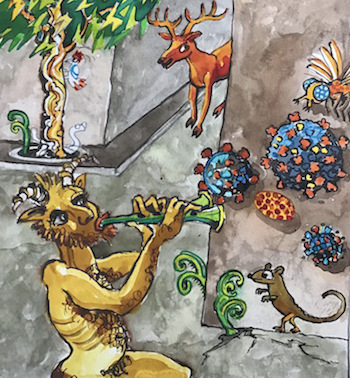 Right there, confusion reigns, opening the door for misinformation. The common cold is caused by a coronavirus, and so is the flu, facts which spur conspiracy nuts to claim the pandemic is not that serious.

Even so, most of us—criminal and courageous alike—are getting smarter (with the apparent exception of the current impeached president). The coronavirus has already taught the average Jack and Jill an encyclopedic volume of new phrases like PPE, supply chains, flattening the curve, and second wave. Everyone like me who slept through Statistics 101 was reminded that flattening the curve in a pandemic refers to spreading the incidence rate out to give hospitals more time to heal the seriously ill and to free up personnel, beds, and equipment. That’s brilliant.

Ordinary people in the street (and on social media, of course) now throw around terms like N95 respirator, ventilator, intubation, and Remdesivir, as if they’re instant experts. Many of us were effectively quarantined in our homes for most of March through May, except for essential workers like nurses and grocery clerks. And late-night comedians have had a field day with this material. I’ve heard social distancing called a science-based excuse to avoid contact with neighbors and relatives you don’t like anyway; an immunity passport, an official document issued exclusively to Republicans and Libertarians as protection against repeated lies; and zoonotic, a disease contracted by people who eat the animals at the zoo (too close to truth to be funny).

One term I particularly like is Generation C. Although digital analyst Brian Solis has defined it as “connected consumers,”10 I’m using Generation C to mean children born during or after the coronavirus pandemic. My definition might also include Children born at the Confluence of Crises that start with the letter C: Consumerism, Capitalism, Corruption, COVID-19, and Climate Change.

Or another kind of Change...

The murder of George Floyd, filmed in broad daylight, was so shocking, so heart-breaking, so infuriating that some people just felt like smashing things. And the police did, too, though most of them apparently wanted to smash the people smashing things. Fortunately, the prevailing sentiment lay with the crowds in the streets (“the language of the unheard,” as Martin Luther King said11), who were surprisingly orderly and peaceful all in all, given decades of police brutality and systemic racism, some filmed, some not. This has initiated a worldwide soul searching, giving rise, inevitably, to new concepts and new words to help guide us to a more equitable, kinder, helpful, and just world.

Once again, the conversation starts with naming the action itself. The aftermath of Mr. Floyd’s death involved some serious destruction and looting, as well as excessive police force. Was this action a riot as the White House claimed? A protest as many in the streets called it? A rebellion as some news outlets began saying? Or an uprising as the European press labeled it?12

To my mind, uprising best describes what happened: the masses rose up against oppression and, yes, inevitably, some got carried away, and a few “bad actors” exploited the situation. Says one activist on the front line: “Nothing will change with chants and posters. For systemic change, there must be major disruption.”13 The phrase cancel culture has taken hold to depict this disruption, especially the toppling of historical statues seen as symbols of White supremacy.14

But what’s more important, property or people? The fact that Trump ordered military helicopters to threaten his fellow Americans is unforgivable. How different it would have been had he emerged from his bunker and spoken with them, or asked a leader or two to come forward and then heard them out. Hard to imagine.

One of the most important words from this uprising is still being defined: defund, which doesn’t mean to eliminate funding for the police, but to redistribute some of that money to neglected social programs. As the slogan goes, “Defund the Police. Refund the Community.”15 People of all colors are also calling for an end to “qualified immunity,” whereby law enforcement avoids prosecution for violent acts that would put the rest of us in jail for years; and to “no-knock warrants,” which allow police officers to break down your door day or night if they think you’re committing a crime inside—warrants now banned in Louisville, Kentucky, after Breonna Taylor was shot eight times in her own bed by police who didn’t knock.16 In support of protesters, a few good cops have even begun “taking a knee,” the symbolic gesture made sensational by San Francisco 49ers quarterback Colin Kaepernick.

In some ways, all true learning springs from crisis. Without problems to solve, traumas to heal, or lives to defend, we can become complacent. New challenges bring new ideas, and new ideas need new words, and new words keep us thinking, learning, talking, and writing.

One narrative, in the spirit of GND and Skeptical Science: planetary warming and weather destabilization create new environments for disease, deprivation, and stress, which disproportionately affect the poor, disenfranchised, and otherwise most vulnerable of us—who erupt in civil unrest, causing the “haves” to seek more authoritarian leaders to bend laws, distort truth, and crack down on the “have nots.”

But how does all of this connect? It’s hardly a stretch to see that accountants, doctors, and teachers need each other’s vocabulary and cooperation to carry out their work. And the crises facing the world? Here’s another narrative: We’re all part of something bigger than ourselves and our nations. We’re global. We’re cosmic. And we’re scared that the end is coming. All the more reason to “think globally; act cosmically,” you might say.

[The following links were retrieved in June and July 2020.]

Recent awards include Grand Prize Winner in Crosswinds Poetry Journal’s 2016 poetry contest, and the poem was published in their Spring 2017 issue. Cooper’s poetry has also been selected for Ted Kooser’s “American Life in Poetry” and Tweetspeak Poetry’s “Every Day Poems,” and his work has been nominated four times for a Pushcart Prize. One of his micro-fictions (Options, republished in Issue 3 of KYSO Flash) was selected in April 2015 as winner of the annual String-of-10 Contest, sponsored by Flash Fiction Chronicles. His play That Perfect Moment (with co-writer Charles Bartlett) was a headliner at the NOHO Arts Center in North Hollywood and The Little Victory in the 2009-10 seasons. His essay It’s Time to Rethink Recycling appears in Earth Island Journal (18 June 2020).