not my gay son 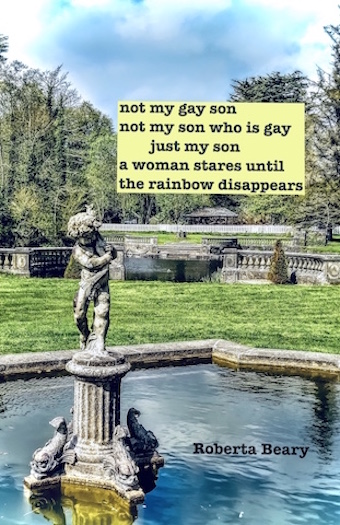 Photograph was taken on the grounds of Westport House in County Mayo, under which lie the remains of one of many castles in Ireland belonging to Grace O’Malley, the Pirate Queen (circa 1530–1603), and later owned by Lord Sligo, one of her descendants. Also on the grounds of Westport House stands a bronze statue of the Pirate Queen by artist Michael Cooper, and within the house, an exhibition on the life of O’Malley compiled by author Anne Chambers.

From Wikipedia (retrieved 3 May 2020):
https://en.wikipedia.org/wiki/Grace_O%27Malley

Her writing has appeared in Rattle, KYSO Flash, 100 Word Story, Cultural Weekly, and Beltway Poetry Quarterly, and is also featured in A Companion to Poetic Genre (John Wiley & Sons, 2011) and Haiku In English: The First Hundred Years (W. W. Norton, 2013).

Ms. Beary lives in the west of Ireland with her husband, Frank Stella, and tweets her photoku and micro-poetry on Twitter [at] shortpoemz.

⚡ Barfly, one of more than a dozen of Beary’s works which appear in KYSO Flash; for a list of others, see the KF Index of Contributors.