It sounded like an easy job—better than those long hours at the barre. Hundreds of pliés and grands battements but that stuffy little haut bourgeois with his frock coat and lace handkerchief is a monster. He calls me his little monkey girl and makes me pose all day in his drafty studio wearing nothing but a skimpy leotard—my arms outstretched à la seconde, shoulders spasming, standing en pointe until my legs tremble and my toes throb.

Ellen had it easier—sitting on a comfy banquette in a warm café, wearing a gorgeous brocade frock. Nothing to do on a rainy afternoon but stare at a glass of absinthe. Rumor is, the mec beside her had a bottle hidden under the table and kept her glass topped off. No wonder she looks a wee bit droopy. But you should have seen me, hobbling home at dusk to a cold flat with no hot water to soothe my aching joints. I’d have traded places with her in a flash—even if it meant wearing that outlandish hat.

winter mist
an old woman’s eyes
in my face

Author’s Note: Ellen Andrée was the model for Degas’ L’Absinthe. 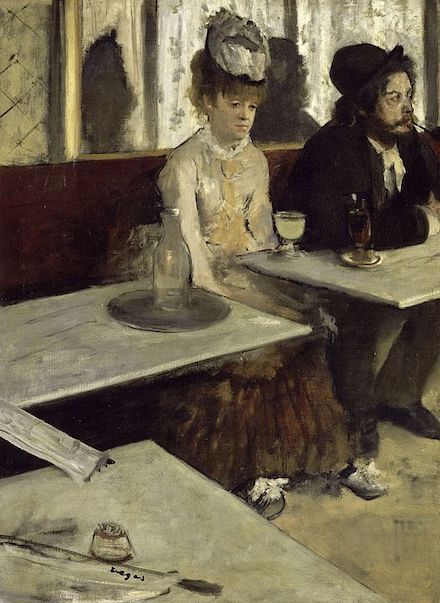 L’Absinthe (aka The Absinthe Drinker or Glass of Absinthe) is an oil on canvas painting completed between 1875 and 1876 by French Impressionist artist Edgar Degas (1834-1917), now held in the permanent collection of Musée d’Orsay in Paris.

Originally entitled Dans un Café (In a Coffee Shop), the painting was panned at its first showing in 1876, with critics calling it “ugly and disgusting.” Subsequent showings in 1892 and 1893 caused even more controversy and tarnished the reputations of its models, Ellen Andrée (French actress and artist’s model) and Marcellin Desboutin (French painter and printmaker).

After many years of teaching ESL at the University of Oregon in Eugene, Harriot West began writing poetry as an antidote to academic writing. Her primary interest is haibun, and she is the author of two award-winning collections, Into the Light (Mountains and River Press, 2014) and Shades of Absence (Red Moon Press, 2018).

⚡ Things I’ll Never Tell You, haibun by Harriot West which was nominated by MacQ for the Red Moon Anthologies, and selected for publication in Contemporary Haibun 17 (Red Moon Press, 2022).

⚡ West’s ekphrastic haibun story Picking Sunflowers for Van Gogh first appeared in KYSO Flash online and is reprinted in our 2016 anthology, State of the Art. And we were thrilled when this charming piece was selected as one of 55 winners for reprinting in The Best Small Fictions 2017 anthology, guest edited by Amy Hempel.

⚡ Featured Writer: Harriot West in Contemporary Haibun Online (Volume 11, Number 1, April 2015); includes “a brief bit of advice” (86 words, in fact) from West on writing haibun, as well as her haibun “A Brief Analysis of Contemporary Society As Seen Through My Eyes”

⚡ Until One Day I Said Enough: Harriot West on Haibun, an interview by Jeffrey Woodward in Haibun Today (Volume 9, Number 1, March 2015)