After The Unfortunate Cat (1869) by Charles Verlat

Tom, the head chef at the Hotel Rubens, was missing. From the menu du jour, only the appetisers, a choice of glistening caviar, or pickled pink herrings, delicately presented in Delft china dishes, had been served. The diners in the hotel’s grand, wood-panelled restaurant were getting restless. A hairless, pinch-faced diamond dealer and his petite Persian wife stared at each other in stony silence; a vivacious opera singer in white chinchilla drummed her red painted claws on the table, sporadically clearing her voice with a cough; the director of Antwerp Zoo, a distinguished gent wearing a Russian blue waistcoat, kept checking his pocket watch and sighing.

Behind the scenes, the waiters ran around like a clutter of wild cats. One hurried to the fish market to search for Tom, another was dispatched to the Matsijs coffee house, and a third, to the less than salubrious dockside tavern Tom was known to frequent. All was to no avail. Tom was nowhere to be found.

In the cool of the cellar, amongst strings of onions, nibbled cheese rounds, and an empty magnum of Moet, a mischief of mice laughed and jeered, as they staggered across the open pages of the chef’s preciously guarded recipe book. Strung up from a rafter like a hock of ham, Tom dangled, praying for one more life. 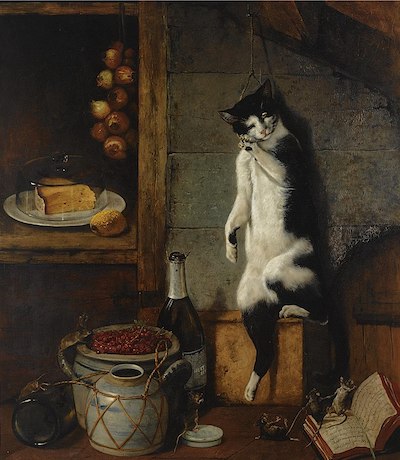 The Unfortunate Cat (oil on panel, 1869), by Belgian painter, printmaker, and educator Charles Verlat (1824-1890), was sold at auction in October 2009 at Sotheby’s Amsterdam. Image above was downloaded from Wikimedia Commons (31 August 2022).

is from Stourbridge in the UK. Her first poetry pamphlet, Enter GHOST, was published by dancing girl press in 2022. Her debut poetry collection, The Quiet Spy, was published by Pindrop Press, also in 2022. A recent newcomer to writing flash and micro-fiction, she has stories published with MacQueen’s Quinterly and The Ekphrastic Review. In July 2022, she was thrilled to win the “Pokrass Prize” at the Bath Flash Fiction Festival for her story Miracle Grow, which will also be published in the Festival’s fifth printed anthology, scheduled for release at the end of this year.