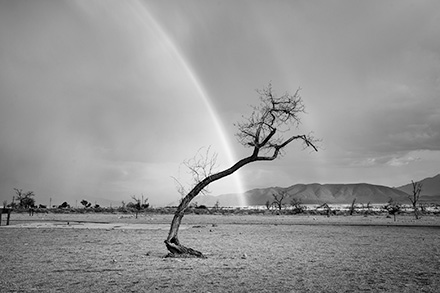 Chuck Kimmerle’s Rainbow and Dead Tree is reproduced above with his permission. The image is from his Manzanar gallery of 113 photographs, which were shot at the Manzanar National Historic Site (Independence, California), “a former incarceration camp which imprisoned more than 10,000 innocent people of Japanese descent, mostly American citizens, during WWII” (source: www.chuckkimmerle.com; accessed 22 August 2022).

is a U.S. based, fine art, landscape photographer who prefers to work in the reticent and quiet areas located in-between the popular, overcrowded, and over-photographed destinations of grand beauty.

While his style is rooted within the foundations of traditional landscape photography, his observations and interactions are both contemporary and introspective.

⚡ Photographing in Black and White: Seeing Beyond Color, an article by Chuck Kimmerle at PetaPixel (17 September 2021), courtesy of ELEMENTS Magazine.