Gallery of the Like-Minded

After a photograph by John Levy 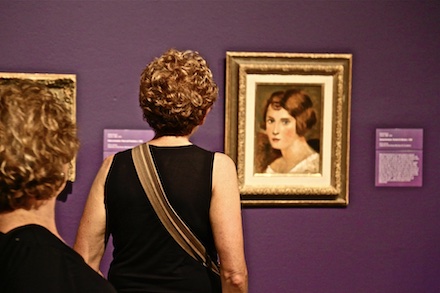 
burnt sienna
a day in the life
of an oak

Temperatures hit a pleasant 80°F this afternoon on the cusp of autumn. There’s a cloud of activity outside the wild honeybee hive in the neighbor’s massive oak. All the sisters in that brief wedge of sun—I saw them first on the ground as shadows.

Photograph of two women viewing artworks in a gallery, above, was shot by John Levy at the Tucson Museum of Art and is reproduced here with his permission. The painting in Levy’s photograph is Portrait de femme (oil on canvas, ca. 1934-39) by André Derain (1880-1954), French painter, sculptor, and co-founder of Fauvism with Henri Matisse.

lives in northern California among seventeen thirsty redwoods. Her haibun and short prose have appeared in 100 Word Story, KYSO Flash, Mid-American Review, MacQueen’s Quinterly, Modern Haiku, Moon City Review, and Unbroken. Her work has been nominated for a Pushcart Prize and widely anthologized.

Recent anthologies include Nothing Short of 100 (Outpost 19, 2018), NOON: An Anthology of Short Poems (Isobar Press, 2019), and Contemporary Haibun 17 (Red Moon Press, 2022). Her books include a prose poem e-chapbook, Qualia (White Knuckle Press, 2017), and an award-winning collection of short poetry, for Want (Ornithopter Press, 2017). Her latest collection, Miles Deep in a Drum Solo, is now available from Backbone Press.

⚡ 42R Mill Street, haibun by Cherie Hunter Day which was nominated by MacQ for the Red Moon Anthologies, and selected for publication in Contemporary Haibun 17 (Red Moon Press, 2022).