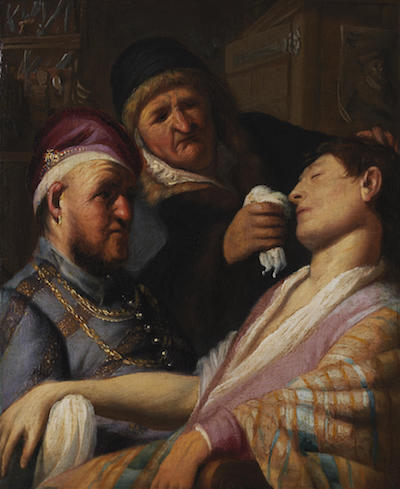 Unconscious Patient (An Allegory of the Sense of Smell)*

Original oil on panel (ca. 1624-25) by Dutch Golden Age painter
Rembrandt van Rijn (1606-1669) resides in The Leiden Collection
(New York), one of the largest private collections of Dutch art in the world.

1. Details about the painting above are available at The Leiden Collection, owned by New York financier Thomas Kaplan and his wife, Daphne. Several paintings by Rembrandt are discussed, including two others that also reside in this collection, Stone Operation (Allegory of Touch) and Three Musicians (Allegory of Hearing).

Re Unconscious Patient, see also The story behind a Rembrandt painting’s journey from a New Jersey basement to the Getty by David Ng in The Los Angeles Times (7 May 2016).