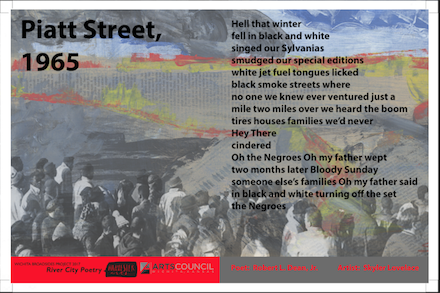 Collaborative photo-poem copyrighted © 2017 by Lovelace and Dean.
All rights reserved.

—Previously published in 2017 by River City Poetry for their Wichita Broadside Project, which features “dynamic collaborations between Wichita Poets and Artists.” Artwork appears here with permissions from both the artist and the poet.

At 9:31 AM on Saturday morning, January 16, 1965, a KC-135 Stratotanker crashed into a predominately African-American neighborhood at Piatt & 20th Street in Wichita, Kansas. All seven crew members and 23 people on the ground were killed, with an additional 27 people injured and 15 houses destroyed. On Sunday, March 7, 1965, six hundred Civil Rights marchers crossed the Edmund Pettus Bridge in Selma, Alabama, only to be beaten by State troopers, sheriff’s deputies, and posse men. At least 17 marchers were hospitalized and 40 others injured.


—Poem and author’s note were published in Dean’s collection of poems At the Lake with Heisenberg (Spartan Press, 2018); both appear here with his permission.

1. Text of Dean’s poem from the collaborative artwork is also included here, with the goal of improving accessibility for visually impaired folks. Screen readers and other assistive technologies often cannot decipher text which appears inside an image like the artwork above. This is why I typically “repeat” in MacQ the text of poems below the haiga or other artworks within which they appear.

is an artist in Wichita, Kansas who works in paints, pixels, and words. The midwestern landscape and wildlife, including bison, are frequent subjects in her work. Her literary work has been published in Poetry Magazine, Cutbank, and River City Poetry. Her photographs and paintings have appeared in The Georgia Review, Essay Daily, and KYSO Flash.

An expanded bio and her portfolio are available at:
https://pixeltime.com/

⚡ The Mystery of Disappearing Bees, photo-poem with visual art by Skyler Lovelace and poetry by Roy J. Beckemeyer, reprinted in KYSO Flash (Summer 2019) from River City Poetry and the Wichita Broadside Project 2017.

is the author of two full-length books: The Aerialist Will Not Be Performing, ekphrastic poems and short fictions after the art of Steven Schroeder (Turning Plow Press, 2020), and a poetry collection, At the Lake with Heisenberg (Spartan Press, 2018). His chapbook, Pulp, is forthcoming from Finishing Line Press in July 2022.

A native Kansan, Dean studied music composition with Dr. Walter Mays at Wichita State University before going on the road as a bass player, conductor, and arranger; he was a professional musician for 30 years, playing with acts such as Jesse Lopez, Bo Didley, Frank Sinatra Jr., Vic Damone, Jim Stafford, Kenny Rankin, B. W. Stevenson, and the Dallas Jazz Orchestra. And he put in a stint with the house band at the Fairmont Hotel Venetian Room in Dallas. While living in Dallas, he also worked 20 years for The Dallas Morning News and made the transition from music to writing before moving back to Kansas in 2007.

Dean is a member of the Kansas Authors Club and The Writers Place, and the event coordinator for Epistrophy: An Afternoon of Poetry and Improvised Music, held annually in Wichita, Kansas. He lives in Augusta, Kansas, along with a universe of books, CDs, LPs, an electric bass, and a couple dozen hats. In his spare time, he practices the time-honored art of hermitry.

⚡ Metal Man, ekphrastic poem inspired by a 1955 photograph of Dean’s paternal grandfather in the Boeing machine shop; published in The Ekphrastic Review (28 July 2018) and nominated for Best of the Net.

⚡ Two of Dean’s ekphrastic works in MacQueen’s Quinterly (Issue 5, October 2020): Impression, CNF after Berthe Morisot’s painting Woman and Child on a Balcony; and Eyes on You, a poem after Aurore Uwase Munyabera’s painting Conflict Resolution