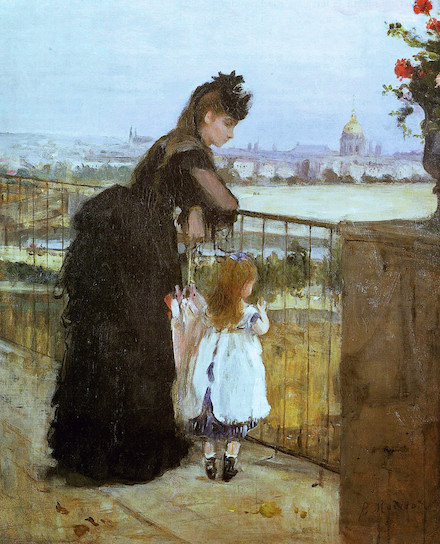 Woman and Child on a Balcony by Berthe Morisot *


Look! Napoleon’s tomb! That great, golden Dôme des Invalides, over there, across the river!

They ignore us, silly tourists that we are. That’s old news to these two. The Belle Époque has just begun. The Commune recedes into the rubble of memory. No, something is happening down there, below them, on the street. A funeral cortège? The woman is clothed in waterfalls of black. Someone she knows? Her face, gently rouged but clean of lip paint, without turning, speaks to us: If I were in mourning, you would not see flesh through the sheer sleeves of this gown. I would not have drawn up the fullness of my skirts into a puff. And I would not be dangling a salmon pink parasol. No, this is not a sad day. Neither is it an extraordinary day. It is a day, and we are in it. It is our reverie, and we prefer you not intrude.

And so, we hang back, lost in thought. Does the parasol mean they have just come in, or were they just going out, when the whatever-it-is caught their attention—a noise in the street other than the usual peddlers, pedestrians, and omnibuses? We inhale the hazy scent of sky, Seine, distant buildings. Note the flowers in full blood bloom, the russet leaf on the balcony tile, the yellow-brown blur of the landscape the girl is overlooking, the short sleeves of the girl’s dress, wonder what season we are in. The girl grips the balustrade as if she were at the zoo, at the lions’ feeding time; the woman, we decide after much dithering, has her one visible eye on the child, as if to make sure the little one does not slip between the bars.

Shall we leave them alone like this, then, a daydream lost to time? Or shall we, on impulse, brush them into history, since we seem to be situated at artist’s-eye vantage? Will it make any difference to our palette if we intuit what the painter knows? That the woman is our sister, Edma, the child our other sister Yves’s daughter, Paule, home for a visit to our parents at 16, Rue Franklin, and that the view below is the family garden? That what enraptures Paule is the ruin of the studio Father built for Edma and us, wrecked by who knows which side during Semaine sanglante—Bloody Week? That this is simply an intimate domestic scene, an any day, perhaps even common, occurrence—no ballerinas, water lilies, boating parties, we leave those to the men—a theme we will paint throughout the course of our career, despite the great Corot having declared Edma, who has traded brush for husband, the better painter? That we, the soon-to-be wife of one Manet and already bosom friend and model of the other, will not only keep our bristles, but launch Impressionism, and, in the 1880 exhibition, be judged the best of them all by the fierce critic of Le Figaro? That, less than a quarter century from this daydream, this reverie, this impression, the poet Mallarmé will inform Renoir, Degas, Monet, in cold, clicking dots and dashes: “I am the bearer of terrible news: Berthe Morisot is dead.” That, when all else is dust and bone, it is the intimate, the utterly domestic, the unabashedly gilt-less, which remains.

1. Woman and Child on a Balcony (painting, oil on canvas, 1872) by Berthe Morisot (1841–1895) is held by the Ittleson Foundation (New York, USA). Image above was downloaded from Wikimedia Commons:

Many thanks to Robert L. Dean, Jr. for providing two links to additional info:

2. Dozens of images, along with details about Berthe Morisot’s family, may be viewed at the art blog The Impressionists. After clicking on the link below, scroll down to “Berthe Morisot’s family (15)” for an image showing Berthe’s sisters and her niece. The post which follows it, #16, refers to her painting Woman and Child on a Balcony and also includes an image of her initial watercolor sketch.

3. Journalist Christopher Dickey became captivated by Morisot after an exhibition at the Musée d’Orsay and set out to find “traces of her that remain in Paris today....my main point of reference for the Morisot walkabout would be the scene of one of her most famous early paintings....” In the following article in The Daily Beast (25 August 2019), Dickey illustrates that the 1872 balcony painting depicts the home of the artist’s parents.

is the author of two books: The Aerialist Will Not Be Performing, ekphrastic poems and short fictions after the art of Steven Schroeder (Turning Plow Press, 2020), and a poetry collection, At the Lake with Heisenberg (Spartan Press, November 2018). Nominated for a Pushcart in 2019 and multiple times for Best of the Net, his work has appeared in Chiron Review; Flint Hills Review; Heartland! Poetry of Love, Resistance & Solidarity; I-70 Review; Illya’s Honey; KYSO Flash; MacQueen’s Quinterly; Red River Review; River City Poetry; Shot Glass; The Ekphrastic Review; and the Wichita Broadside Project.

Dean is event coordinator for Epistrophy: An Afternoon of Poetry and Improvised Music, held annually in Wichita, Kansas. He has been a professional musician, having played bass for, among others, Jesse Lopez, B. W. Stephenson, Bo Didley, The Dallas Jazz Orchestra, and the house band for the Fairmount Hotel Venetian Room. He grew up in Topeka and Wichita, Kansas before spending 30 years between Los Angeles and Dallas, where he worked at The Dallas Morning News. He now lives in Augusta, Kansas (population 9,389), where it has taken him a decade to finally adjust to the BNSF rumbling through every hour of every night.