It was the summer solstice. I’d dislocated my shoulder after falling off a standing stone in the Eisteddfod ring on Rhyl promenade. I met the Lemon sisters in the emergency room of the local Hospital. The sisters are identical twins and seemed so at ease that they stood out from the sick and injured who sat in rows of plastic chairs.

To pass the time I was reading on my phone about venomous spiders, when one of the sisters leaned over my shoulder and informed me, “Our father died after being stung by a deathstalker scorpion.” I wondered how to reply, but was distracted by the fact that the women were attached by their hair. The twins grew their hair long and had woven, glued, or sewn it together in such a way that the join was invisible. I said, casually, that I liked their hair, and I meant it. That was enough for the sisters to include me in their cohort, what they called their group of carefully selected friends.

As I left the hospital, some four hours later, the sisters, Sissy and Stacy, were waiting. There had been nothing wrong with them. They just enjoyed watching people, and A&E had been on their list of places to visit.

Two years on, I’m sitting in the twins’ parlour. Sissy is sharing her belief that there are messages hidden in the intricate floral patterns of William Morris, the renowned wallpaper designer, messages only an artist can perceive. Stacy rejects the idea, but she has allowed her sister to decorate one wall in every room of the house with Morris’s creations. The pattern in the parlour is, according to Sissy, “particularly informative.” Stacy likes it because “it’s one of William’s favourites, or so he tells me.” Stacy is currently dabbling in spiritualism. All six of their friends, their cohort, are present today. We’ve been invited to take part in a séance, part of an esoteric project the twins have undertaken. No one here thinks it peculiar. The cohort is unusually open to new experiences. The sisters have a talent for finding such people.


—Inspired by the painting Siamese Twins by Leah Saulnier: 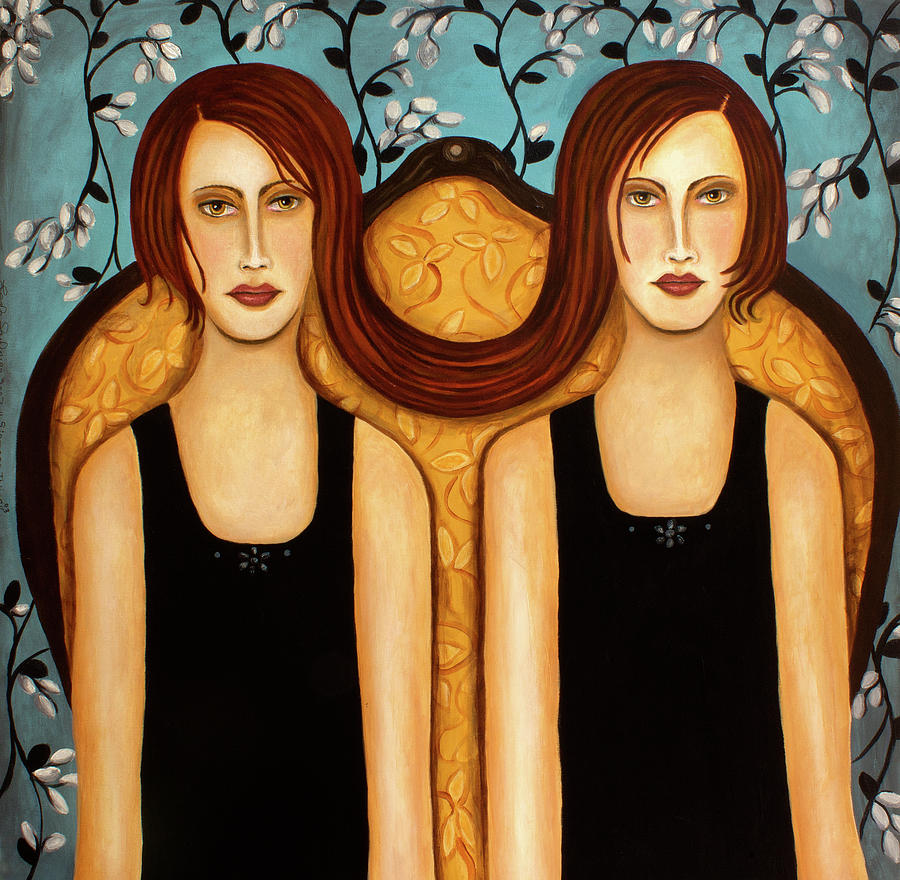 Copyrighted © by Leah Saulnier, The Painting Maniac.
All rights reserved. Reproduced here with her permission.

1. In reference to Paragraph 3 above: In British hospitals, A&E refers to “Accident and Emergency,” an urgent-care department that treats serious injuries and illnesses.

2. In reference to final paragraph above: Philosopher and master of woodblock printing William Morris (1834-1896) also creatively dabbled in poetry, literature, embroidery, and carpet-making. During his lifetime, he produced more than 50 wallpaper designs, “some of the most recognizable textile patterns of the 19th century” (source: Meet William Morris: The Most Celebrated Designer of the Arts & Crafts Movement by Emma Taggart at My Modern Met, 28 January 2018).

lives in North Wales in the UK; his work has been published in Prole Magazine, Poetry Bus Magazine, and Firewords Magazine; and he has contributed to several online journals including The Ekphrastic Review. David writes because it excites him.

⚡ A Family, prose poem by David Belcher (after the painting by Fernando Botero), in The Ekphrastic Review (29 June 2020)

is a Humorist/Surrealist oil painter and portrait artist, who was born and raised in the Midwest. The daughter of an artist-musician, she has been a resident of Santa Fe, New Mexico since 1992 when she followed her parents to the City Different to help run a family business. Passionate and prolific, she paints fulltime in a country setting that gives her a direct view of the mountains.

⚡ A Convergence of the Rational and the Absurd: “An interview with surrealist humorist Leah Saulnier” by Michael King in Realism Today (July/August 2018)