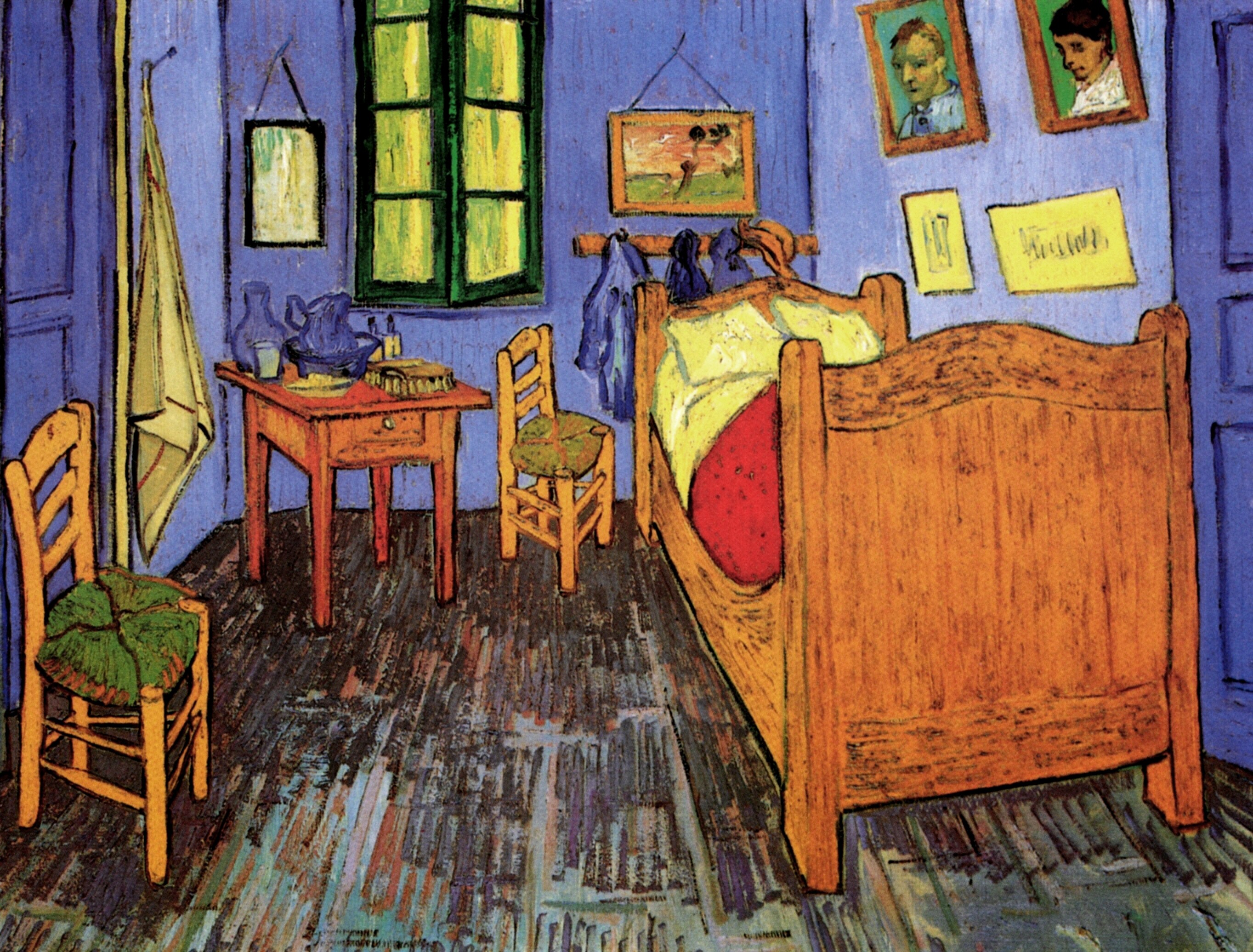 
“...the walls pale lilac, the floor in a broken and faded red, the chairs and the bed chrome yellow, the pillows and the sheet very pale lemon green, the blanket blood-red, the dressing-table orange, the washbasin blue, the window green. I had wished to express utter repose with all these very different tones....”

Poet’s Commentary on “Letters From Vincent”

The quotations before and after the poem are from letters from Vincent van Gogh to Paul Gauguin in 1888 and to Vincent’s brother Theo in 1889. The artist had sliced his ear in December 1888 after a row with Paul Gauguin and a misunderstanding with his brother that had left him despondent.

Correspondence from and to van Gogh can lend insight into his paintings, and I was struck in this series of letters by his explanation to Gauguin of what he was trying to represent in his choice of colors in his paintings of his room in Arles. The comments about how he was attempting to recreate the tranquility of Japanese décor by his combination of primary colors and simple furnishings when juxtaposed with his nonchalant listing of expenditures that included medical and cleaning costs associated with his mutilation a month previous struck a chord with me.

So I attempted in this lineated poem to move from the “repose” of his painting to the chaos by focusing first on the orange chair and then the red blanket, which, perhaps subconsciously, he had referred to as “blood-red,” ending up with the final image of his bloody hands. Interestingly enough, this transition was not my goal from the outset, but something that crept up on me as I wrote, looked at the paintings, and read and reread the letters.

1. Bedroom in Arles (1888-89) is a series of three almost identical paintings by Dutch artist Vincent van Gogh (1853-1890). All three may be viewed online at The Art Institute: Van Gogh’s Bedrooms (link retrieved on 1 May 2022):
https://archive.artic.edu/van-gogh-bedrooms/about-paintings

2. The text of Letter 706, from Vincent van Gogh to Paul Gauguin (17 October 1888), which includes a sketch of the bedroom, is displayed at Van Gogh Letters.org (link retrieved on 2 May 2022):
https://www.vangoghletters.org/vg/letters/let706/letter.html#translation

latest poetry collection is Mouth Brimming Over (Blue Cedar Press, 2019). Stage Whispers (Meadowlark Books, 2018) won the 2019 Nelson Poetry Book Award. Amanuensis Angel (Spartan Press, 2018) comprises ekphrastic poems inspired by modern artists’ depictions of angels. His first book, Music I Once Could Dance To (Coal City Press, 2014), was a 2015 Kansas Notable Book. He recently co-edited (with Caryn Mirriam-Goldberg) Kansas Time+Place: An Anthology of Heartland Poetry (Little Balkans Press, 2017). His poetry has been nominated for Pushcart (2015 and 2020) and Best of the Net (2018) awards, and was selected for The Best Small Fictions 2019.

Beckemeyer serves on the editorial boards of Konza Journal and River City Poetry. A retired engineer and scientific journal editor, he is also a nature photographer who, in his spare time, researches the mechanics of insect flight and the Paleozoic insect fauna of Kansas, Oklahoma, and Alabama. He lives in Wichita, Kansas, where he and his wife recently celebrated their 60th anniversary.

Please visit author’s website for more information about his books, as well as links to interviews and readings (scroll down his About page for the link-list).

⚡ The Color of Blessings in MacQueen’s Quinterly (Issue 5, October 2020)

⚡ Words for Snow, a prose poem in KYSO Flash (Issue 9, Spring 2018), which was selected for reprinting in The Best Small Fictions 2019