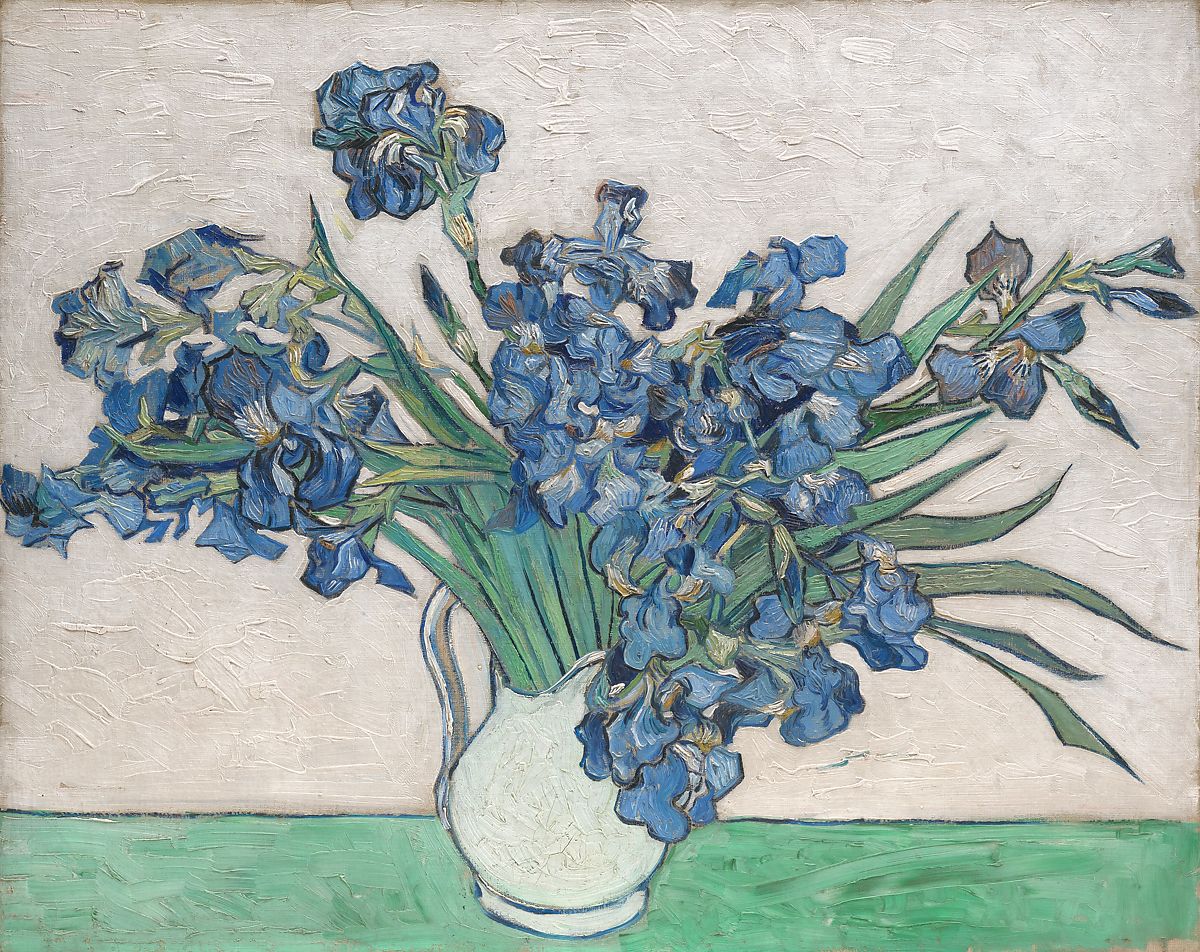 We watch these irises arise from a mediocre green tablecloth as if they were citizen soldiers: the flowers seem to pull strips of the cloth, tug them up into the pitcher, gnaw on the tips to sharpen them, turn them into leaves, into swords. We see them grope frantically for freedom, for achievement, face toward or away from one another, stretch, twist, reach out, the elegant agony of indecision visible on their countenances. They roil in their turmoil. “What shall we do?” they shout.

Two groups emerge. One larger, center and right, on the verge between inertia and movement, is led by a youthful upstart with three younger followers who point the way and pull the mass of stragglers along, slowly making headway. “The spout shows us the direction we must take!”

While just left of center another flag stands taller than the rest, erect and strongly mature, looking back—seeing something promising in the eagerness evident in this splinter group, the energy they all seem to share as they stretch beyond the handle, no clear leader as yet, but all united—sees an opportunity to become the wise and congenial advisor, gently nudging this dynamic assemblage toward continued growth and advancement, but in a new direction.

We see them all as actors, this still life as frozen tableau, Parisians on the ramparts, stark against the creamy wall, their pitcher, wellspring of origin and only true light, and yet they give their all to leap out, as if its very openness is the birth canal for their democratization, and, as they call “Liberté, égalité, fraternité,” we salute them, sing along, cheer “Vive la revolution!”—our words floating like exuberant petals against the sky.

Ekphrastic writing is like this: A disparate and mindless, often unconscious mingling of memories, happenstances, ideas, wanders aimlessly around in some back hallway of our brain; we sit down to look, to truly look, not just at, but into, around, under a piece of familiar art, open our eyes and hopefully our minds, and some sort of alchemy happens.

I can identify several streams and currents that constituted that eddying and swirling process for the flash fantasia prose piece I chose to title “Insurrection.”

I have been on a kick of reading historical mystery series by various authors, the latest being the “Sebastian St. Cyr” mysteries by C. S. Harris. These novels are set in Regency England around 1812, when many monarchies in Europe had ended, and French and other deposed royal families had found refuge in England. Perhaps images of a fleur-de-lis, or the ornate curl and flounce of living irises themselves brought this idea of revolution to mind when I saw the mob of blue flowers dominating van Gogh’s still life.

And of course, the ongoing Russian war on Ukraine is constantly in the background permeating every aspect of our lives in some way. Perhaps it was images of refugees streaming away from the conflict, their loved ones turning back to fight, that led me to see in two distinct groupings of flowers in the painting.

And my wife’s spring garden is just flourishing, coming into its own, narcissus and tulip buds and flowers popping up, and the swords of iris leaves are marking where flags are soon to come. So, irises were already on the margins of my thoughts.

Another factor in the genesis of this ekphrastic piece relates to my having delved into painting (acrylics and watercolors) the past 4-5 years, which has involved learning color theory, the chemistry of pigments, and other esoteric information that was of interest to my engineer’s brain. The colors in this painting, Irises (1890), which is on exhibit at The Met Fifth Avenue in Gallery 825, have faded from the original. The wall behind the flowers was originally pink, the flowers purple. Van Gogh, like others of his era, used reds which contained fugitive organic pigments that faded fairly rapidly when exposed to light.

If I had been writing as if I was seeing the image in van Gogh’s time, I would have referred to the original colors; as I did in an historical flash fiction piece last year, “Forever,” in which I quoted from van Gogh’s letters (The Ekphrastic Review, 15 November 2021).

But in “Insurrection,” I am responding to what I see today, so I treat the colors as they now appear, without complicating things by contemplating how van Gogh might have seen/painted them: think as a writer responding to the art as an entity at some remove from the artist rather than implicitly or explicitly involving the artist in my cogitations.

The point of all this being: there are likely a number of ways to approach, to think about, to engage with a work of art. Any one of which can be a solid basis for ekphrasis. I happened to try this first, and it worked; if it hadn’t, I could have tried another approach.

latest poetry collection is Mouth Brimming Over (Blue Cedar Press, 2019). Stage Whispers (Meadowlark Books, 2018) won the 2019 Nelson Poetry Book Award. Amanuensis Angel (Spartan Press, 2018) comprises ekphrastic poems inspired by modern artists’ depictions of angels. His first book, Music I Once Could Dance To (Coal City Press, 2014), was a 2015 Kansas Notable Book. He recently co-edited (with Caryn Mirriam-Goldberg) Kansas Time+Place: An Anthology of Heartland Poetry (Little Balkans Press, 2017). His poetry has been nominated for Pushcart (2015 and 2020) and Best of the Net (2018) awards, and was selected for The Best Small Fictions 2019.

Beckemeyer serves on the editorial boards of Konza Journal and River City Poetry. A retired engineer and scientific journal editor, he is also a nature photographer who, in his spare time, researches the mechanics of insect flight and the Paleozoic insect fauna of Kansas, Oklahoma, and Alabama. He lives in Wichita, Kansas, where he and his wife recently celebrated their 60th anniversary.

Please visit author’s website for more information about his books, as well as links to interviews and readings (scroll down his About page for the link-list).

⚡ The Color of Blessings in MacQueen’s Quinterly (Issue 5, October 2020)

⚡ Words for Snow, a prose poem in KYSO Flash (Issue 9, Spring 2018), which was selected for reprinting in The Best Small Fictions 2019