The warm soil scent of fresh tomatoes takes me to your funeral. It was late August, and my mother’s garden was overflowing. Baseball tomatoes, perfectly round, heaped in bushels. Pancake tomatoes, broad and flat as fava beans. Lumpy tomatoes, splitting, spilling pulpy seed stuffing, sewn back together by sun and rain.

You showed me how to make gypsy soup: it was nothing but flour and tomatoes, with a lot of paprika and a little bit of bacon or butter. You’ll never go hungry, you said, stirring Serbia tenderly with a long wooden spoon. We added cashews, and cracked black pepper, with poetic license.

If only I knew what I was getting myself into, I think. But then, I think, I did. I was in trouble the moment I sat down at your table. You slid the tureen, the loaf, towards me, the wedge of fat for the bread, the small dish spilling caraway. You looked at me straight on, then blew on the soup to tame its boil, but still I dove headlong into that burning ring of fire. 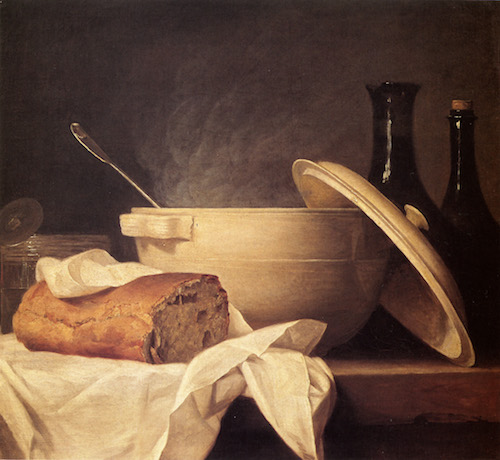 The original oil-on-canvas painting White Soup Bowl (La jatte blanche, 1810), by Anne Vallayer-Coster (1744–1818), resides in a private collection. The reproduction above was downloaded from The Athenaeum.