And so what if I am, thinking of you? You who brought me Bob Mackie perfume and godawful books by Henry Miller. You whom I have always loved. Once at a party, after you returned from Budapest, you dropped the bomb: you were going to ask her to marry you. And you did. Sometimes, even after that, you’d text or email in the night, tell me you’d awakened from a dream. Once, you said we were picking emeralds in an orchard in the snow: we held them in my apron, against my pale bare breasts. Another time, another dream, we were alone in a room and you’d awakened because your mouth was all tangled up in me. I didn’t know whether I was dead or alive when you said those things.

To come down from the fairy tales you told me, I would stare straight ahead at the blank black of the ceiling, hypnotized by my mobile’s blinkering glare. Sometimes I got out of bed and walked down to the water and listened at that edge, seeking signs in the sprinkle of pointy lights and the moon. Much later, again, with nowhere left to turn, we turned to each other. I was a widow by then, still young, but almost too old for your children. You reached for me, peeling back the quilt and pulling it back over us, and we held each other until the morning. We never once took off our clothes, but I got stuck on the way you touched my face and how your eyes stayed open when you kissed me.

You said our child would be bigger than Picasso. You, me, our fucking blood, baby, you cried, your hands pressed against my belly, as if I needed convincing. Why you said such a thing, I will never know: you never came close to planting that seed.

You do not know how I sat there with a tiny diamond in my hand, thinking I could make up the lost time, be part of some sort of a family. I was insane, and sad, and planning to bestow that small stone to you. It was everything I had. You never came.

Every week it was another story, another cold wok stirred with untouched sesame and snow peas. The last time I waited in vain, I swallowed that stone. Popped back that diamond like a bad pill. I wanted it gone. Drank both bottles alone, and threw up in the ravine in the backyard. If I was half hoping in my misery for you to find me, you didn’t: it was a dog in the morning, sniffing for a spot to piss in. I did what I had always done after my epic messes: I stood up, brushed off my jeans, and got on with it.

I thought of you today because of a dream I had—that a tree grew in the woods out back of where I used to live, branches heavy laden, a weeping willow covered in dew and diamonds and heaving low to the earth. It had grown out of that small sparkle seed I had unwittingly planted, there, in my sick and my grief. 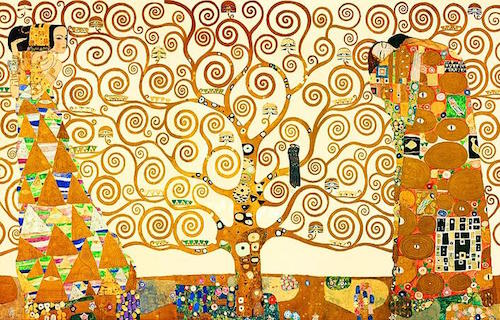 The Tree of Life, Stoclet Frieze (L’Arbre de Vie, Stoclet Frieze; 1905–1909) was painted by Gustav Klimt (1862–1918) as a study for a series of three mosaics (The Tree of Life, Expectation, and Fulfillment; 1905–1911), which he created on commission for Palais Stoclet in Brussels, Belgium. The panels covered three walls in the dining hall of the palace. Klimt’s original painting (77x40 inches) resides at The Museum of Applied Arts in Vienna, along with his other study sketches for the Stoclet Frieze. Reproduction above was downloaded from WikiArt.