—After The Starry Night (1889) by Vincent van Gogh


All was darkness in the time before time, you said, and if anyone there had been expecting you to say anything at all, it wasn’t that. There was a weird little glitch or some kind of stitch in time where everything was still and then the clatter of clinking crystal and toothy veneers resumed its former pitch. I could tell from your jittery boots that you were desperate for a cigarette, so I invited you to join me outside. We stood where the sky parted and the path forked and we stared at the star-spangled stretch of the world without end. I watched the red ember at the end of your cigarette flicker and spit a little and wished I still smoked. You had itty bitty hands and they dangled their jumbles of jewels with the same nervous rhythms of the rest of you. I was in that moment convinced you were all that was keeping me alive. I felt plugged in, as if something had changed drastically, as if everything had. Well, you were tiny and jumpy, a rickety rinkydink of a trinket, with sparks coming off of your lips and your frenzied hands. I was thinking right then that you were most likely a figment; electricity, or fire, or something, something fleeting and fast, and then you said, well, look, not everything is written already, all stories begin without an ending, even yours. 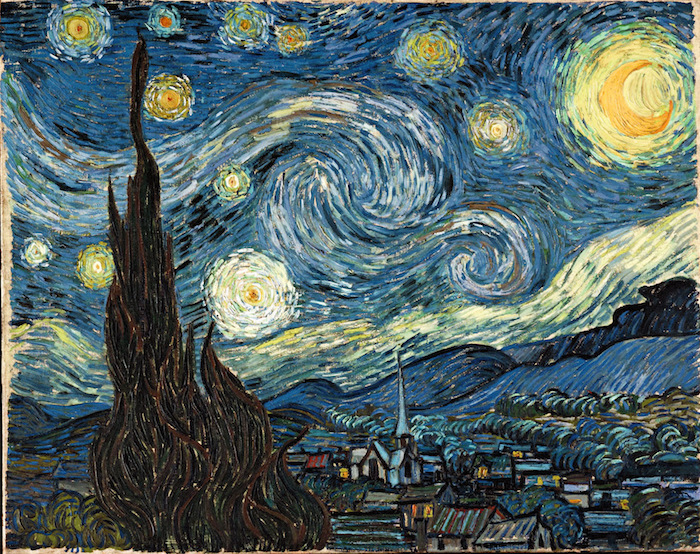 The original oil-on-canvas painting The Starry Night (1889), by Vincent van Gogh (1853–1890), is held by the Museum of Modern Art. The reproduction above was downloaded from Wikimedia Commons.