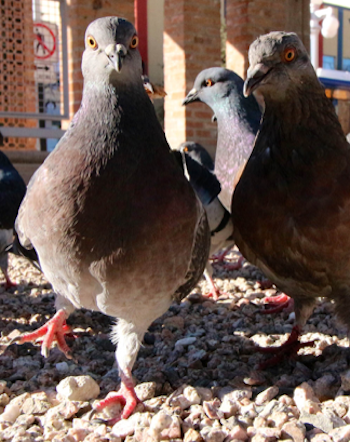 Copyrighted © by John Levy. All rights reserved.
Reproduced here with his permission.


The message is mitigated by this season’s windup crew. They sail down from tenement ledges across concrete canyons. Grey examines grey. They find the castoff pizza crust, muffin crumble, abandoned French fry. They strut and shuffle, coo and wing slap their way around the city. The quick are rewarded handsomely in the park, where lonely folks go with bags of week-old bread. Fiefdoms get drawn and redrawn. Every wire is accounted for, and every statue tagged. The wage for flock disloyalty usually costs one toe. But there’s never any shortage of new members. The streets have a lot to offer.

is an associate editor for The Heron’s Nest. Her short prose and poems have appeared in 100 Word Story, KYSO Flash, Mid-American Review, MacQueen’s Quinterly, Modern Haiku, Moon City Review, Quarter After Eight, SmokeLong Quarterly, Unbroken, and Wigleaf. Her work was nominated for a Pushcart Prize and is anthologized in Nothing Short of 100 (Outpost 19, 2018), Accidents of Light: KYSO Flash Anthology 2018 (KYSO Flash Press), and NOON: An Anthology of Short Poems (Isobar Press, 2019).

Recent collections include a prose poem e-chapbook, Qualia (White Knuckle Press, 2017), and a collection of short poetry, for Want (Ornithopter Press, 2017). She is also the author of two award-winning haiku collections: apology moon (Red Moon Press, 2013) and The Horse with One Blue Eye (Snapshot Press, 2006).