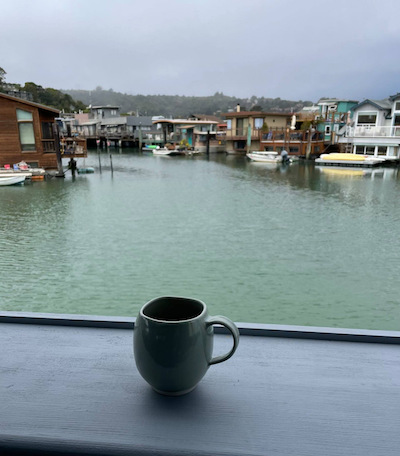 
Guy Matsuda’s an exquisite potter. We were college roommates, and yeah, two guys, we got that. He moved to Western Mass., married Phil, built an outdoor kiln. I moved to the Bay and married Phyll. Over the years, we’ve stayed connected thru poems & clay—he has a wall of my work, and his bowls hold our fruit & salads, his vases our flowers; and, this Matsuda morning, his cup my coffee. I love how art connects.

teaches “low fat fiction” and is the author of five collections of poetry and short prose: Nova Nights (Nomadic Press, 2021), Edible Grace (KYSO Flash Press, 2019), Soundings and Fathoms: Stories (Finishing Line Press, 2018), House Samurai (Iota Press, 2006), and Parts & Labor (Thumbprint Press, 1992). His stories have appeared in dozens of venues including Carve, daCunha, Flashback Fiction, KYSO Flash, Sea Letter, Third Wednesday, and Exposition Review, where he was twice a Flash 405 winner. In 2018, his flash was nominated for the Best of the Net anthology.

Born in the Chihuahuan Desert near the Mexican border, Guy grew up on a Sting-Ray in Ventura, learned to write in the Peace Corps during a civil war in Guatemala, honed his craft pulling weeds and planting flowers as a gardener in San Francisco, and later received his M.A. from San Francisco State, where his teaching career began. He’s been a creative-writing midwife since 1991.

Author’s blog: This Day Afloat: Reflections of Life on the Water