—after The Twittering Machine by Paul Klee 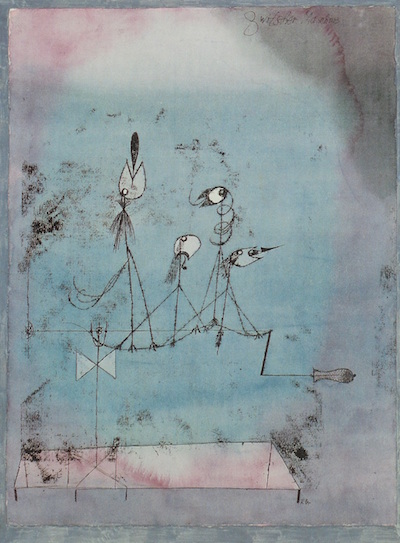 Tweet, tweet, twitter, twitter, all those stunning and brave flags. Brevity is the source of all wit, so said the bard, but maybe he was wrong. The nattering of the concise and irate, condensed outrage, this incessant twittering in the wings, so ubiquitous that it is almost white noise. So much is brittle and huffy and mean. We want so desperately to separate ourselves from sinners, we fail to see we have become the witch hunters, pointing the same fingers, setting the same fires. We are a swarm of gossiping birds, a murder of karens.

—From the author’s forthcoming collection, Winter in June

The Twittering Machine (1922) (watercolor and ink; oil transfer on paper with gouache and ink borders on cardboard) by Paul Klee (1879–1940) is held by the Museum of Modern Art in New York City.

Image above was downloaded from the public domain via Wikimedia Commons (link retrieved on 21 May 2021):
https://commons.wikimedia.org/wiki/File:Die_Zwitscher-Maschine_(Twittering_Machine).jpg

is from Toronto, Canada. Her prose poetry and flash fiction are widely published in literary journals and anthologies, with recent or forthcoming appearances in Gyroscope, Free Flash Fiction, Bright Flash, Club Plum, Red Eft, and Indelible. A recent story won first place in a contest at MacQueen’s Quinterly, and her work has been nominated multiple times for Best of the Net and the Pushcart Prize. Her most recent of five poetry collections is Pretty Time Machine: Ekphrastic Prose Poems. Some of her works have been translated into Urdu.

Lorette is founder and editor of The Ekphrastic Review (established 2015), a journal devoted to writing inspired by art. She is also an award-winning visual artist, with collectors in 25 countries from Estonia to Qatar. Visit her at: www.mixedupmedia.ca

⚡ Fresh Strawberries, an ekphrastic prose poem in KYSO Flash (Issue 11, Spring 2019), nominated for Best of the Net and the Pushcart Prize