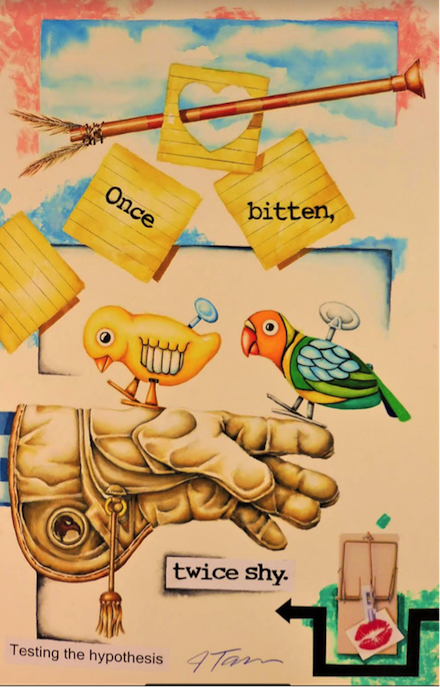 
In the middle of the grassy field the falconer stood with his gauntlet hand outstretched. A large and mottled bird was showing off as we came walking up, flying from the falconer’s gauntlet across to a post, perching for a second, and then flying back. There were ten of us gathered loosely in a semi-circle, all of whom had paid a small fee to watch. The falconer looked slowly around the crowd and suddenly his arm rose, the leather jesses flying, and the bird shot upwards and was gone. The falcon circled higher and higher until he was only a tiny dot orbiting the field. The falcon’s sudden flight and the bell on his leg that jingled had startled up a small murmuration of starlings from the surrounding trees and they flew upwards in a cloud. At just that second, the falcon dropped into free-fall, coming out of it just in time to make a graceful sailing arc that ended in a small explosion of feathers midflight as the falcon seized the nearest of the frantic starlings in his talons and headed back to the gauntlet.

promised kisses bait
a trap for unsuspecting
hearts. There’s only one
chance here, and that one’s fatal
love lies in wait all around

Cupid, stupid! Shot
an arrow through my heart
get the message?
it was a shabby business
ruffled feathers, blunted point

Our friends’ daughter, Ruthie, said she wanted more than anything to hold a falcon on a gloved hand and send it off to hunt. So, Ann arranged it, and when Ruthie and her parents came to visit, we all drove out to the falconer’s muses where the birds were kept. Here versions of the story vary, and I know only two versions. In the first, the duller and routine one, Ruthie got to wear the gauntlet and fly the falcon. In the second, with the falcon perched on her extended, gloved hand, she whispered something to the bird, and he lifted from her arm and flew dramatically away. We watched the bird as he disappeared into a far pinpoint that itself then vanished.

even now the eye falls
on that gloved hand where toys
pretend to threaten
but can’t get through. But, if they
were just trying to cheer us up?

1. Testing the Hypothesis (mixed-media painting, 2021) by artist John Tarlton is reproduced here with his permission.

2. Epigraph is attributed to Gil Vicente by Gabriel García Márquez (1927–2014) at the beginning of his novella Crónica de una muerte anunciada (Chronicle of a Death Foretold) (Colombia, 1981). Gil Vicente (ca. 1465–ca. 1536) was a Portugese playwright and poet, to this day considered the father of Portugese drama.

is an American artist and poet who lives and works on the north island of New Zealand. He has written and/or illustrated more than 30 children’s books, and holds a PhD in Education and a Master of Arts Degree in Fine Art.

Additional details plus Artist’s Statement and fine-art images are available at: johntarlton.com