—After a photograph by James Crombie, Starling murmuration over Lough Ennell, and a video by Colin Hogg, both of which were published in The Irish Times on 4 March 2021 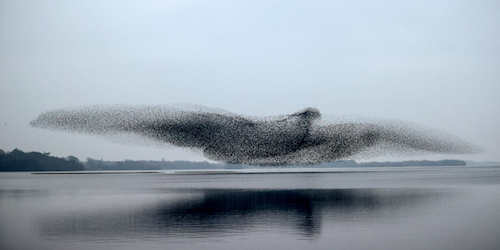 Copyrighted © 2021 by INPHO/James Crombie.
Reproduced here with permission from the photographer.

is a senior photographer at Inpho Sports Photography, who joined the agency in 2006 as winner of the No Experience Required TV program broadcast on RTÉ (radio television network in Ireland). In January 2021, the Press Photographers Association of Ireland awarded Crombie the title of Press Photographer of the Year for his portfolio of striking sports-related images throughout 2020.