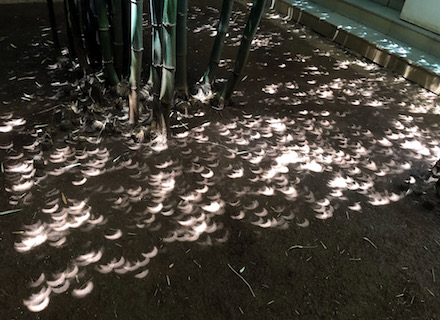 Eclipse Under the Bamboo *

bamboo trees scatter
a litter of eclipses
a carpet of smiles

Image above is reproduced from NASA’s Astronomy Picture of the Day, and appears here with photographer’s permission.

As explained in the caption at APOD (26 June 2020): “...During the June 21st solar eclipse, this display appeared under a shady bamboo grove in Puné, India. Small gaps between close knit leaves on the tall plants effectively created a network of randomly placed pinholes. Each one projected a separate image of the eclipsed Sun....”

is Director of the Inter-University Centre for Astronomy and Astrophysics (IUCAA) in Puné, India, and Visiting Researcher in the Astrophysics and Space Research Group at the University of Birmingham, United Kingdom. He teaches Astrophysics in the IUCAA-NCRA Graduate School. His Curriculum Vitae, list of publications, and research interests are available at his website:

His poem “Viewing the Dead” was nominated for a Pushcart Prize. Two of his poems appear in Silent Waters, photographs by George Digalakis (Athens, 2017). He is the author of two chapbooks, Standing Inside the Web (Bear House Publishing, 1990) and Fire and Shadows (Legal Studies Forum, 2008) (offprint). Selections of Gary’s poetry and photography can be found on his website, 4P Creations: