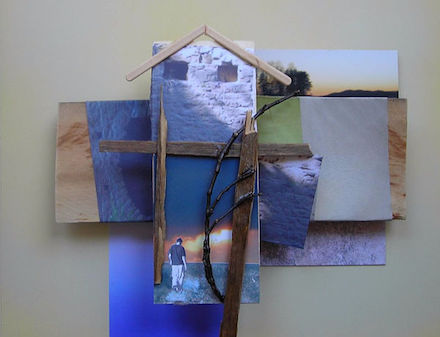 After living variously in Austria, California, Wisconsin, and New Hampshire, Gary LeBel now lives in the greater Atlanta, Georgia area. He is the founder and co-owner of an optical alignment consulting firm that has been serving heavy industry throughout the southeast for two decades. He’s also a poet and artist (primarily collage, montage, and assemblage), whose work has been published in the United States, the United Kingdom, India, and Japan. He believes that art, or anything else worth doing, is a life-long pilgrimage.

Self-taught, LeBel has been image-making in words and pictures for many years. Abacus, his first collection of short poems, haibun, and prose poems, was published as an e-book in 2008 by Modern English Tanka Press. His haibun have appeared in Contemporary Haibun Online, Haibun Today, Lynx, and Modern Haiku; and his tanka prose, in Contemporary Haibun Online and drifting sands haibun. His haiga have been shown in Haiga Online, Modern Haiga, Modern Haiku, and Reeds Contemporary Haiga. He’s at work on his second book, a collection of haibun and other short-form prosimetra.