Double-Timed at the Nickel Diner 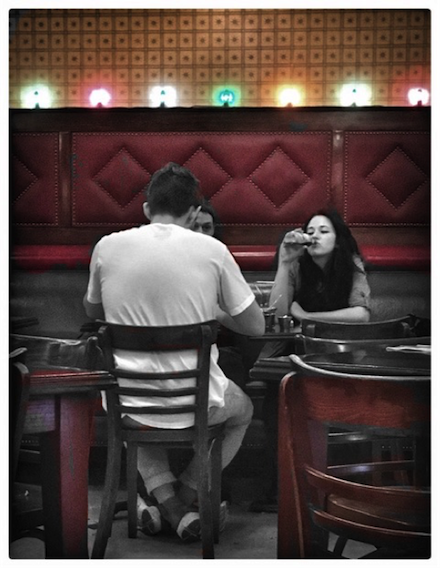 Tanya raised the Coke to her lips. Took a swig. Mouthed the words: Wanna get outta here, baby? I watched as she rammed her tongue into the bottle for emphasis, her blue eyes fixed on my brown ones. No mistaking that, I thought. I’d waited all my life for a girl like Tanya, wild as the wind. The girl my mama warned me about. My best friend’s girl. Terry was sitting right next to her, for crissake! And she, acting like he wasn’t. Tanya had a habit of sucking her left thumb. An oral fixation, always something in her mouth. In my dreams, my cock was in her mouth; I’d wake up sticky and spent. Now she was making noises like she wanted me for real, and I admit, I felt qualmish. I was raised better. And Terry? He was like a brother. But that girl had me by the balls, mesmerized. Her long, dark hair, framing her face, flowing past her tits, fragrant, like night blooming jasmine. “Hey, Terry,” I said, to break Tanya’s spell. “Wadya wanna do now?” Terry shrugged, intent on finishing his burger. Idiot. Never could see what was right in front of him. I watched him chew. Tanya watched the clock on the diner’s wall. “Tick tock. Tick tock,” she said.

Rhone Fancher’s writing has been nominated multiple times for the Pushcart Prize and Best of the Net, and appears in more than 100 literary magazines, journals, and anthologies, including The Best American Poetry 2016, Wide Awake: Poets of Los Angeles and Beyond, Rattle, The MacGuffin, Slipstream, Hobart, Cleaver Magazine, Poetry East, Fjords Review, Rust + Moth, Pirene’s Fountain, Askew, and KYSO Flash.

A lifelong Angeleno, Alexis is poetry editor of Cultural Weekly. From the S-curves of Topanga and the sprawling beaches of the Westside, to the stunning views of downtown Los Angeles (DTLA) from her previous loft studio, her beloved city can be construed as another character in her work. She and her husband now live on the cliffs of San Pedro, a sleepy beach community 20 miles from their former digs in DTLA. They still have an extraordinary view.