Edmonia Lewis: The Death of Cleopatra 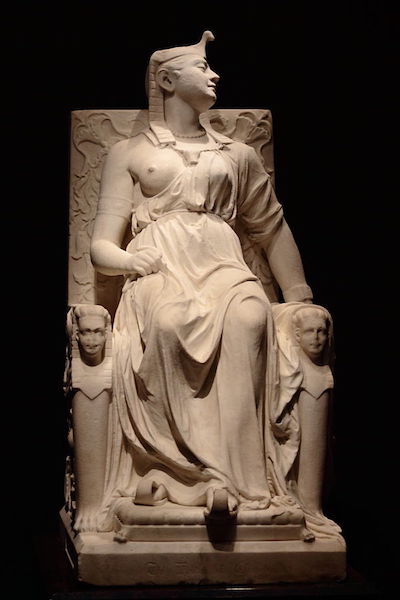 
I have managed in my life so far not to see anyone actually die. I have had people close to me die, of course, but I didn’t watch them, so a little part of me does not yet believe they are dead. And that’s the thing, isn’t it? If you actually saw someone dead, or had assisted at the embalming, you would have no illusions. The person you once knew reduced to tissue and bone. And that is what will happen when I die. The consciousness in me that now creates my world, internal and external, will cease. The electro-chemical processes will stop or change and the phenomenon that was me being alive will stop with them. And the dead never know, never feel, never regret. And they never dance.

she holds the tiny
asp in her right hand, a viper
that she had suckled
out of love or wrecked ambition doesn’t really matter now

death, but the hard stone
refuses to yield
and neither Michelangelo
nor Pygmalion could create a living and breathing thing

Edmonia Lewis met Colonel Robert Gould Shaw, commander of the 54th Massachusetts Regiment of black soldiers in the American Civil War, and out of admiration made a marble bust of him, which ultimately his family purchased. Anna Cabot Lowell Quincy Waterston, a poet, then wrote a poem about Lewis, Shaw, and the marble bust; while Lewis, in turn, made a bust of the poet. Later, Robert Lowell, another Brahmin poet, would write about a neglected bronze relief of Colonel Shaw and his 54th Massachusetts Regiment of black soldiers leaving Boston on their way to the war:

Two months after marching through Boston,
half the regiment was dead;
at the dedication,
William James could almost hear the bronze Negroes breathe. 3


it was a small world
this black woman sculptor ran
around in—Lowells
Cabots and Quincys. She made
Cleopatra a white woman

not to be confused
with her black self. The statue
once adorned a grave
of a racehorse by the name
of Cleopatra, was damaged

in storage by boys
who knew no better than to paint
marble, or hit it
with sticks. She died in London
our first black female artist

The image is one of calm. Cleopatra sits on what looks like a throne, in a relaxed posture, leaning slightly back with her head tilted, the left arm hanging loose; her abdomen sags. Only the right hand, the hand holding the asp, is being kept deliberately where it had been, despite the pull of gravity. The looseness of the body is mirrored in the cascade of peignoir, the right of the bodice open to reveal the circular breast, the knees slightly parted, detached yet anxious. A girl, then, committing suicide because she had been driven into a corner.

in Rome she studied
sculpture, had her own studio
carved marble herself
where so many others had
apprentices to do that

now the statue sits
in the big Smithsonian
an artwork among
all the others. Remember, though
the mountain she had to climb

up from poverty
early orphaned and alone
she rose on storied
wings to the top of the heap
her own history, and ours

—Poem with footnotes first appeared in Touching Fire: New and Selected Ekphrastic Prosimetra (KYSO Flash, 2018), the author’s collection of ekphrastic tanka prose, with artworks by Ann Knickerbocker and 25 others; and is republished here with author’s permission.

is a retired university professor of political theory who lives in Old Saybrook, Connecticut with his wife, Ann Knickerbocker, an abstract painter, and a Standard Poodle named Nikki. He is the author of three books of prosimetra published by KYSO Flash Press: Touching Fire: New and Selected Ekphrastic Prosimetra (2018), Get Up and Dance (2019), and Carmody & Blight: The Dialogues (2019).

He also has a poetry e-chapbook published in the 2River series, La Vida de Piedra y de Palabra: Improvisations on Pablo Neruda’s Macchu Picchu; an experimental prosimetrum in Lacuna entitled Five Episodes in the Navajo Degradation; “The Rock in a Jar,” an extended prose poem in several parts in Gone Law 32; and “The Turn of Art,” a short prosimetrical drama pitting Picasso against Matisse, in Fiction International.

⚡ Artifact With Steam (2019) by Ann Knickerbocker, ekphrastic tanka prose in the e-collection Get Up and Dance featured in KYSO Flash (Issue 12, Summer 20189)