He’d be forty soon.
Unimaginable.
I do it anyway. 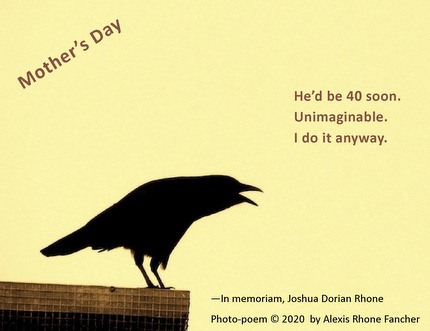 The photo above was shot in Marina del Rey, CA on January 4, 2009. I love crows. Such big brains in small bodies! my grandmother used to say. Like it was their special curse. I often photograph and write about crows.* There’s a large murder of them here in San Pedro. They congregate in a giant tree outside my studio and entertain me with their games and flight.

Rhone Fancher’s writing has been nominated multiple times for the Pushcart Prize and Best of the Net, and appears in more than 100 literary magazines, journals, and anthologies, including The Best American Poetry 2016, Wide Awake: Poets of Los Angeles and Beyond, Rattle, The MacGuffin, Slipstream, Hobart, Cleaver Magazine, Poetry East, Fjords Review, Rust + Moth, Pirene’s Fountain, Askew and KYSO Flash.

A lifelong Angeleno, Alexis is poetry editor of Cultural Weekly. From the S-curves of Topanga and the sprawling beaches of the Westside, to the stunning views of downtown L.A. from her previous loft studio, her beloved city can be construed as another character in her work. She and her husband now live on the cliffs of San Pedro, a sleepy beach community 20 miles from their former digs in DTLA. They still have an extraordinary view.