“Ok. Make out your will first?” she asks.

I drive to the farmer’s market. Get what we need, including her favorite kefir.

With gloved hands I carefully give the vendor a ten and two quarters, and he gives me back two ones.

She gloves up, cleans the food, disinfects the packages. “Where’s the kefir?”

She’s holding the bag upside down. Not smiling.

“You wanted to go for a bike ride, anyway,” she says. “Ride back and get it.”

She has a point.

But there’s a headwind blowing, and the market’s four miles away.

Okay. I glove up, pull on a clean mask, find the helmet, find the cycling gloves, check the tires.

(When they see my blue-green Spitfire, old guys stop me and re-live their paper-route days, waxing nostalgic.)

So I hit the bike path. Taking it easy. The agro bikers fly by me. I’m pedaling into the headwind, playing this little mental game with myself, releasing all expectation that the kefir will still be there, thinking the vendor probably resold it (since it was the last container of Bohemian Cream), thinking maybe it fell out of my bag...anticipating disappointment, trying to head it off at the pass, knowing the passion of expectation is always at the root of my consternation.

For sure it’ll be gone.

For sure he won’t remember.

For sure he’s packed up and gone home.

Who cares. It was $8.50, price of a senior movie ticket which I won’t be buying anytime soon anyway. At least I’m getting in a ride, first of the season, and yeah, thinking about a will now, though neighbor Alan says there’ll be plenty of time for that, at least a couple of weeks, with this virus. Funny guy Alan, with his Brooklyn humor.

And for sure I’m getting out of housebound mode during this Shelter In Place, with exercise and purpose.

A jogger passes me going in the other direction.

Next thing you know I hear his breathing right behind me. I listen hard.

Yep, that’s him breathing. Footsteps, too. He must’ve turned around.

Then he passes me.

He passes me, cuts in front of me, and stays there. The distance between us doesn’t change. He’s like one of those assholes who passes you on the freeway, cuts in front of you, and slows down. Only this one is aerosolizing me with his sweaty hairy back.

I shake my head to myself. Not today, motherfucker.

I swing wide, stand up on my bike, and channel my inner teenage self, for three minutes anyway, long enough to fly by the sweaty bearded wonder—well, more of a standing-up-pumping-hard-bike-veering-side-to-side-maniacal-kind-of-motion—and I leave him in the Guy Dust (that is to say, he’s now reading my bike license plate with my name on it). 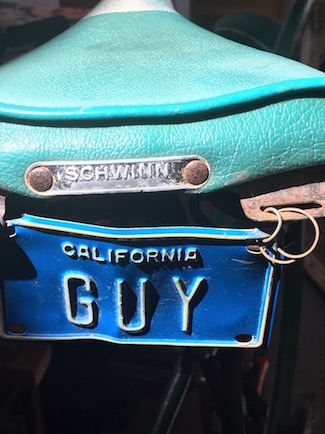 I stay standing up, though the bike path is flat.

I stay pumping hard, though the only thing I hear now is the beating of my woken heart.

Standing up and pumping hard, I really start to cook.

And never, never look back.

I pass a lady in a walker, a couple walking a labradoodle, a birder watching loons in the marsh.

Finally, breathing hard with a full-on sweat, I sit back down and coast a little. At the market, the vendor remembers me, smiles, and retrieves my kefir from the cooler. “Was saving it for you, bro.”

I’m so thankful. Dazed euphoria. Gratitude rapture, enhanced by low blood sugar, perhaps, and being out of shape. No matter. Feeling dope.

I thank him. We elbow bump. I pedal home, kefir tucked in the inner pocket of my fleece, next to my beast-mode heart. No sign of vanquished jogger.

When I arrive home, I de-glove, unmask, and unwrap the kefir. My wife smiles. Disinfects the container.

Breaks out the saltines.

teaches “low fat fiction” and is the author of four collections of short prose: Edible Grace (KYSO Flash Press, 2019), Soundings and Fathoms: Stories (Finishing Line Press, 2018), House Samurai (Iota Press, 2006), and Parts & Labor (Thumbprint Press, 1992). His stories have appeared in dozens of venues including Carve, daCunha, Flashback Fiction, KYSO Flash, Sea Letter, Third Wednesday, and Exposition Review, where he was twice a Flash 405 winner. In 2018, his flash was nominated for the Best of the Net anthology.

Born in the Chihuahua desert near the Mexican border, Guy grew up on a stingray in Ventura, learned to write in the Peace Corps during a civil war in Guatemala, honed his craft pulling weeds and planting flowers as a gardener in San Francisco, and later received his M.A. from San Francisco State, where his teaching career began. He’s been a creative-writing midwife since 1991.

⚡ This Day Afloat: Reflections of Life on the Water, Biederman’s blog