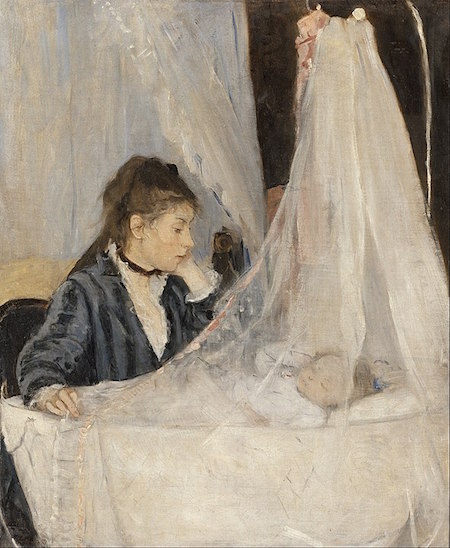 
I used to imagine you: absinthe in one hand, Gauloise rollup in the other, smoking. But that was never you, was it? Only me, lonely for rebellion. Still, you snubbed the Paris Salon, hanging The Cradle, The Harbor at Cherbourg, Hide and Seek, and Reading in the Salon de Refusés.

I used to imagine you noticed everything—all the whites of a wicker cradle, the exact tilt of an exhausted mother’s hand held lightly over the infant sleeping within. The pale stillness of a room’s container of air. And the enclosing boundaries of worry. Ours. Hers.

I used to imagine kestrels, the smallest of hawks in the Pacific Northwest, swooping low over fields just outside town, as they used to.

These days fields are scribbled with crows and sparrows. But peregrines remain, roost on microwave towers downtown and the roof of the old Leopold Hotel. They make do, push limits. I like to think you’d understand.

1. The Cradle by Berthe Morisot (1841–1895) is her most famous painting and depicts one of her sisters, Edma, watching over her sleeping daughter Blanche. Original painting is held by Musée d’Orsay, and the reproduction above was downloaded from Google Arts & Culture:

2. The Leopold Hotel in Bellingham, Washington was built in 1889 and was added to the National Register of Historic Places (NRHP) in 1982.

A writer and a visual artist, J. Yeasting is an admirer of life’s absurdities and the extraordinariness of the ordinary. She lives and teaches in Bellingham, Washington. Her work can be found in numerous places, including Puerto del Sol and the recent anthology, Last Call. She has never met a writing prompt she didn’t like.