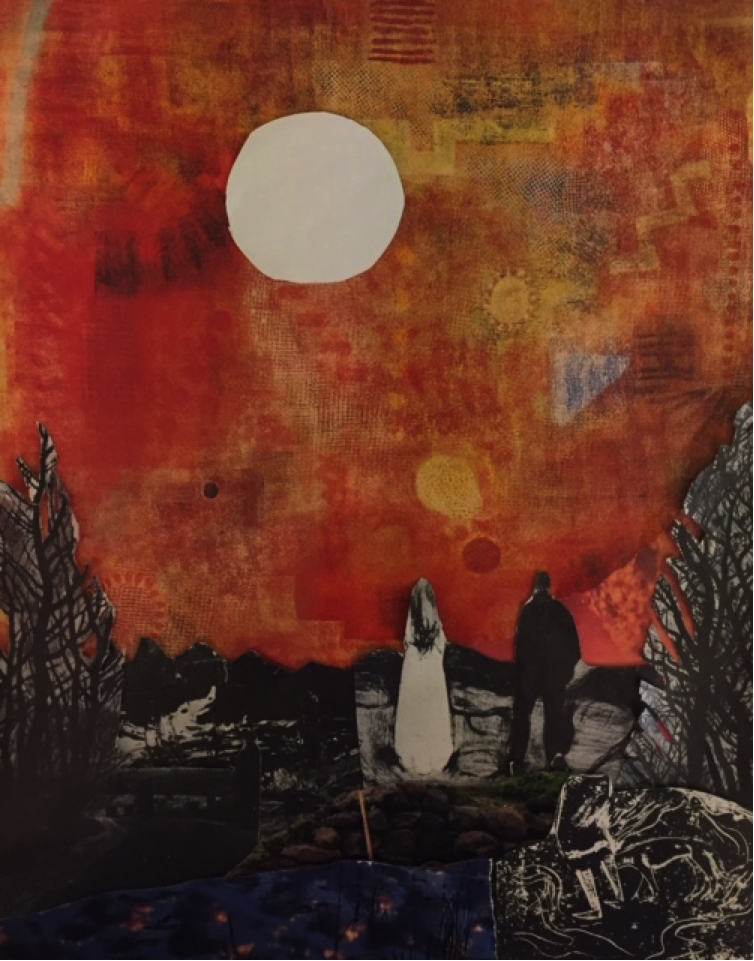 Huge great flashes and weird red things and a moon roughly the size of Alaska. They were driving north when the sky finally decided to break open and pour down its wrath upon humanity. Past burned-out farms with dead sheep and trees strung with schoolteachers and grey-haired country cops bloating in the midnight sun. Past abandoned mission houses adorned with skulls and crossbones. Past a pick-up truck with the windows blown out and bumper stickers touting GUNS FOR JESUS and bed strewn with Rolex watches and gold chains. Frantic young couples with box springs in tow and crates of Apple Jacks and bottles of formula fermenting in cheap foam coolers. Headed for Crapsville, North Dakota. As though another 250 miles of I-65 and ten stinking degrees of cool would save their babies. The self-styled KINGS OF THE ROAD with their cases of Miller Lite and their designer boots and their NRA hats (one has on his tee shirt from a previous life that reads HI I’M LESTER WELCOME TO WALMART) and their barrels of suspicious looking salt pork and their ragamuffin gaggle of purloined teenage brides with swollen bellies and lifeless eyes. Aunt Fannie and Uncle Joe, looking to add another few to the fifty or so they have shared together. Sinners and saints and State Attorney Carly Sue with her demented husband and her two teenage kids. Me, I stayed home, like the old coot in that movie about Mount St. Helens. With a postcard from Mom and a book of poems.


—From A Box of Dreams (Adelaide Books, 2017) by Denis Bell, with illustrations by Louise Freshman Brown; both the story and the artwork above appear here with permissions from the author and the artist.

is a painter and mixed-medium artist whose works are held in more than 600 private, public, and corporate collections in the United States and Europe. She is from Oneida, New York and received her BFA in Painting and MFA in Painting/Printmaking from Syracuse University. As professor of Art at the University of North Florida, Jacksonville, she has been regularly awarded for excellence in teaching and scholarship. In 2005 she received the Outstanding Faculty Scholarship Award and in 2007 the Distinguished Professor Award. For more than 30 years, she has conducted workshops and lectures nationally and internationally.

Ms. Freshman Brown created 23 illustrations for A Box of Dreams, a collection of short stories by a UNF colleague, mathematics professor Denis Bell.

is a professor of Mathematics at the University of North Florida in Jacksonville. He grew up in London, England and studied at the Universities of Manchester and Warwick, where he obtained a master’s degree in statistics and a doctorate in mathematics. He has received several awards for his scientific work, including an Outstanding Scholarship Award from the University of North Florida and a Research Professorship at the Mathematical Sciences Research Institute in Berkeley, California.

A spinner of small tales for many years, Bell started publishing his fiction five years ago. His work has appeared in many literary magazines and journals, including Calliope, Edify Fiction, Foliate Oak, Grub Street, Flash: The International Short-Short Story Magazine, Literary Orphans, Postcards Poems and Prose, The Maine Review, and the Adelaide Literary Awards Anthology, among others. A Box of Dreams (Adelaide Books, 2017) is his first published collection.