—After The Dance Class by Edgar Degas 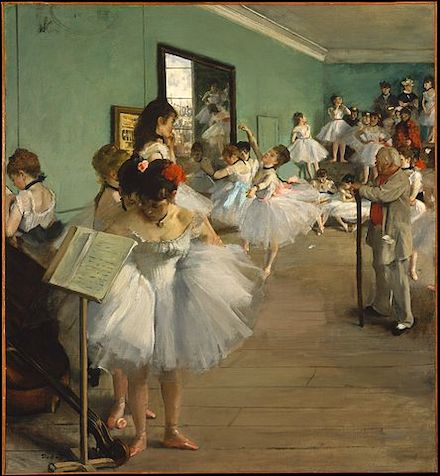 The girls of our ballet class have ample talent, can plié and pirouette as well as anyone trained; as a rule, we are confident dancing. But today was different. Monsieur Antoine, director of the popular dance theatre, came at our teacher’s invitation to watch us practice. The rumor is, the man might put some girl who impresses him in one of his glamorous shows. Suddenly, the dancing we always enjoyed became high stakes during two-thirty class. We all hoped to be the one Monsieur Antoine liked, and it made everyone a bundle of nerves.

At the benches by the wall, our mothers seated primly at the very top, Annette pulled at her neck band as she mentally rehearsed the turns she has done a thousand times. She found it strangely difficult to keep her thoughts straight. Denise beside her seemed little better. Leaning on the wall, hands braced at her back, she thought, I want to do a fabulous grand jeté! But now I dread trying.

Below them at the bottom bench, Colette curled her feet together and set her knees jutting outwards, her hope to stay loose. Soon, she knew, she would be asked to the floor.

At the music stand in front, Giselle had Louise check her waist band twice to be certain it held. What if it comes loose right before Monsieur? her dark, bowed head all but told me.

As the tension crested, Marie took the floor. Our star student, the lithe, nimble girl was bound to impress Monsieur Antoine if anyone did. She made one turn, a second, both excellently. Girls standing around the floor stopped what they did to watch. Marie pirouetted, arms held with delicate, fragile poise, leg just stable beneath her. She brought her foot to the floor a second too quick but realized no other fault.

M. Antoine watched from mid-floor, hands cupped on his cane, a self-content smile on his face. When Marie had done, he stepped forward and looked toward the benches, some word at his lips. We all fell quiet and listened.

“The next one now,” he said flatly. What could we make of this? all the girls thought. One by one, we went on to perform, some fumbling, some soaring. How we fared with the man none of us can say, for he left soon after thanking our teacher. He may have decided our hopes that afternoon, but he never thought to offer us explanations.

Image above was downloaded from Wikimedia Commons on 17 December 2022.

lives and writes in Hartford, Connecticut. He has published stories in Abstract, S/WORD, Corvus Review, MacQueen’s Quinterly, and The Write Launch.