By Robert I. Mann

Wryly looking into each other’s eyes, two young women find love in the middle of a city that is no one’s. A table and two chairs in a restaurant are the quintessential for a city: anonymous, impersonal, worn, and functional. Using them is conquest, a pleasure like no other. On the white table are a small teapot and bowl, making the table as vast as a bright sky with a couple of puffy clouds. As though on a mountain top above the sky, one drinks in that the other is as fashionable as herself—the fashionable seize the moment, the frumpy hide from time. Shafts of light, inside the restaurant and out, play about the women. The couple in the rear do not look at each other. Their table has not been conquered and their world goes out with them as it came in. The women have placed their banners of fashion, makeup, and youth upon conquered land within the city. For an afternoon. 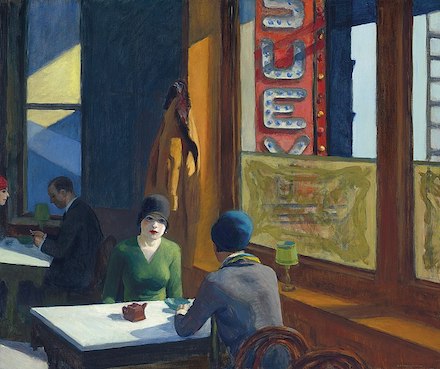 Rolf G. Renner, author of Hopper, states that “...part of what [Hopper’s] pictures are ‘about’ is that death or decay which all paintings in some sense represent, since they destroy the immediacy of perception through the transformation into an image” [Hopper (Taschen Koln: 2002)].

Although the scene of the painting takes place in a social environment there is the sense of loneliness prevalent. The woman in green facing the viewer is sitting with her companion but she does not seem to be interacting with her. As with the couple in the background, the man looks withdrawn from the woman he sits across from. Every human figure is isolated and withdrawn from one another and reserved within themselves. This is portrayed with hidden or obscured faces, retracting a human essence from the figures. This further applies to the woman in detail; even though we get a full view of her face there is a detachment to her because of her stark makeup.

Hopper denied that he purposefully infused this or any other of his paintings with symbols of human isolation and urban emptiness, but he acknowledged that in Nighthawks “unconsciously, probably, I was painting the loneliness of a large city.”


The first quotation interprets Chop Suey in the way Edward Hopper is usually interpreted, as a painter who captured the anomie and ennui of American city life, something Hopper himself denies in the second quotation, which I believe is better representative of his paintings—and it is what the man said, after all. Looking at the young woman in Chop Suey whose face we see, I find her with a slight smile and an interested expression, just the opposite of the Wikipedia page. I don’t see why makeup is considered “detachment” from life. It is supposed to be pleasing, perhaps attracting attention and even desire. A young woman uses makeup as people make up stories, to entertain at the very least. I would have loved sharing the table with these two.

Image above was downloaded from Wikimedia Commons on 26 July 2022:
https://commons.wikimedia.org/wiki/File:Edward_hopper_chop_suey.jpg

was born and raised in California, graduated from UC Berkeley (BA, Humanities) and CSU Northridge (MA, English Literature), and has been teaching writing and English and American literature for nearly 20 years in Italy. His short fiction has been published in numerous online and print publications, among them the new renaissance (an international magazine of ideas and opinions); The Pavilion (a literary room for expat writing); Mobius: The Journal of Social Change; The Bitter Oleander; and Volume 7 of the annual Delmarva Review.

⚡ What is between everything, flash fiction by Robert I. Mann in MacQueen’s Quinterly (Issue 7, March 2021)