[Fishing Boats]: An Excerpt from Dear Vincent:
A Psychologist Turned Artist Writes Back to Van Gogh 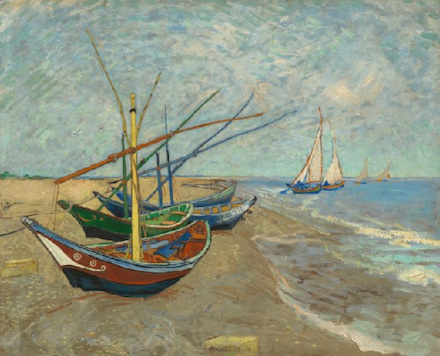 Soon after he arrived at Arles, Vincent traveled farther south to the coast. He longed to smell the sea, feel the sun, and to experience the villages of Southern France. There he made sketches of the beach at Les Saintes-de-la-Mer, which he later painted in his studio in Arles. Influenced by Japanese block prints, he emphasized shadowless areas of flat color with bold outline.

There, at Saintes-Maries, were girls who reminded one of Cimabue and Giotto—thin, straight, somewhat sad and mystic. On the perfectly flat, sandy beach little green, red, blue boats, so pretty in shape and colour that they made one think of flowers. A single man is their whole crew, for these boats hardly venture on the high seas. They are off when there is no wind, and make for the shore when there is too much of it.

My parents had prints on their walls; one of which was yours—Fishing Boats. It was always there through my childhood. On my first visit to Amsterdam I saw it again and I looked at it with the same feeling of affirmation I had when I later saw Da Vinci’s Mona Lisa in Paris. It existed. It was very nice. It was smaller than I’d imagined. It wasn’t until later, when I had grown a bit and had studied painting, that I started to really see Fishing Boats. It made me wonder if the sky pulsed for you as well. If you, like me, believed that the boats themselves are drawn to the sea. How can a painting make me smell salt water and seaweed? How can carbon and pigment alone make me hear the seagulls mourn as I feel the deck drop from under me with the pitching and yawling of the storm? How can I not head out into the early morning sun?

grew up in the lemon groves in Southern California, raised by assorted coyotes and bobcats. A former firefighter with military experience, he served as traumatic stress therapist and crisis consultant—often in the field. A nationally certified teacher, he taught art and writing, served as a gallery director, and still serves on the board of the Sasse Museum of Art, for whom he authored the museum books Fragments: An Archeology of Memory (2017), an attempt to use art and writing to retrieve lost memories of combat, and Dear Vincent: A Psychologist Turned Artist Writes Back to Van Gogh (2020). He holds national board certification as an art teacher for adolescent to young adults.

Recently, Dr. Johnson retired from teaching and clinical work to pursue painting, photography, and writing full time. In that capacity he has written five literary books of artwork and poetry, and one in art history. His shorter work has appeared in Literary Hub, Chiron Review, Shark Reef, Cultural Weekly, and Quarks Ediciones Digitales, and was translated into Chinese by Poetry Hall: A Chinese and English Bi-Lingual Journal. His memoir collection, Chaos & Ash, was released from Pelekinesis in 2020, his Black Box Poetics from Bamboo Dart Press in 2021, The Stardust Mirage from Cholla Needles Press in 2022, and his Fireflies Against Darkness and More Fireflies series from Arroyo Seco Press in 2021 and 2022. He serves as contributing editor for the Journal of Radical Wonder.

⚡ Self Portraits: A Review of Kendall Johnson’s Dear Vincent, by Trevor Losh-Johnson in The Ekphrastic Review (6 March 2020)

⚡ On the Ground Fighting a New American Wildfire by Kendall Johnson at Literary Hub (12 August 2020), a selection from his book Chaos & Ash (Pelekinesis, 2020)