Once Upon a Time in Storyville

It’s barely noon. Mornings are typically slow. Clients don’t show up until mid-afternoon. Miss Lilian helps Ernest set up his camera in the sitting area of her bedroom on the second floor. She raises a small glass of Raleigh Rye whiskey—a gift from an admirer. To your health! She knocks it back and quickly pours another. In front of the camera Ernest is tongue-tied and clumsy. Behind the camera he’s patient and kind. He doesn’t judge her livelihood as a woman of negotiable virtue. He grew up just a block over on Conti Street. She’s flattered to be one of Pap’s girls. She thinks her best asset is her legs because she was a dancer when she was younger. Ernest says it’s her eyes when she smiles and laughs. And now he’s ready to shoot another frame. The light is best here and now. 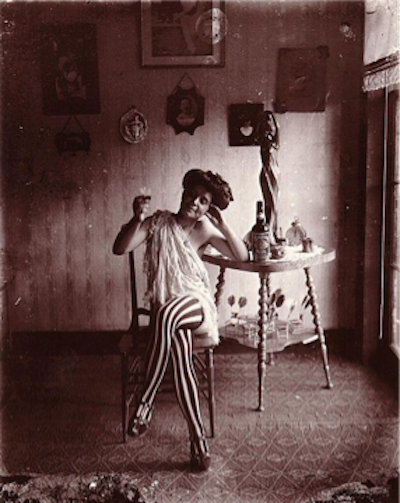 For more about the photographer and the image above, see Photographer E. J. Bellocq gained fame after his death for his portraits of prostitutes in Storyville by Leslie Gale Parr in 64 Parishes (3 January 2011; updated 13 February 2019).

Recent anthologies include Nothing Short of 100 (Outpost 19, 2018), NOON: An Anthology of Short Poems (Isobar Press, 2019), and Contemporary Haibun 17 (Red Moon Press, 2022). Her recent books include a prose poem e-chapbook, Qualia (White Knuckle Press, 2017), and an award-winning collection of short poetry, for Want (Ornithopter Press, 2017). A new collection of short poetry, Miles Deep in a Drum Solo, is forthcoming from Backbone Press in late spring 2022.

⚡ 42R Mill Street, haibun by Cherie Hunter Day which was nominated by MacQ for the Red Moon Anthologies, and selected for publication in Contemporary Haibun 17 (Red Moon Press, 2022).