Standing with Karl before Degas’s dancers brings Mary back to 1973 when Karl was off in Vietnam, and she was stuck at home with Mattie, her four-year-old daughter, no money to speak of but her parents paid for Mattie’s ballet lessons. Her friend, Angie, took her daughter there too, and the night of the big performance, Angie and her husband had a screaming argument in the parking lot, and Angie took her daughter home in the car leaving him there, so Mary offered him a ride.

He cried when they made love, and she touched his tears with her fingertips and moaned loudly while Mattie slept in the other room, and she never told Karl or Angie about it because why pass the pain off to them.

She’s trying to remember the name of Angie’s husband but can’t. It might have been Doug. She wonders where he’s gone. 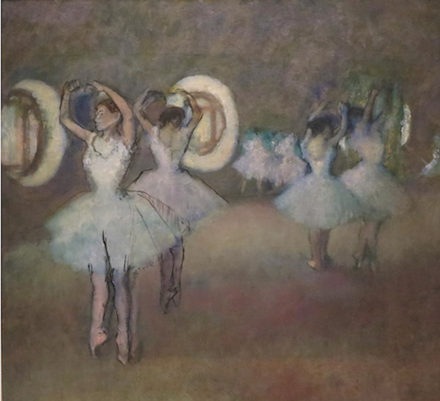 Dancers in the Rotunda at the Paris Opera

was the first poet laureate of Sequoia and Kings Canyon National Parks, and now lives in Jamestown, New York. He is the author of 19 books of poetry and fiction including his latest, Life: Orange to Pear (Bamboo Dart Press, 2020). His poems, stories, and essays are published in hundreds of magazines and journals. His work has appeared on Garrison Keillor’s daily show, The Writer’s Almanac; has been nominated multiple times for the Pushcart Prize; and was selected for publication in The Best Small Fictions anthology series for 2022 and 2016.

⚡ Objects of Curiosity, a collection of his ekphrastic poems (Sasse Museum of Art, 2020)

⚡ Four prose poems in Serving House Journal (Issue 7, Spring 2013), including A Man Stepping Into a River and Poem to the Child Who I Almost Adopted