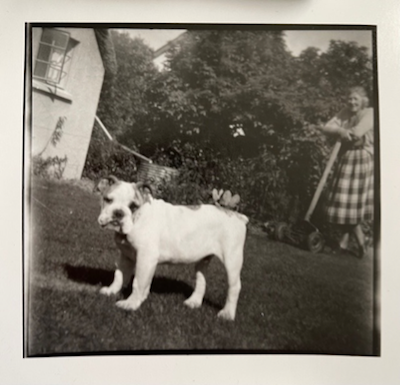 In three years, she will walk with a cane. There will be a different dog, one she can fit on her lap. Safer, she thought when she adopted it, though she will trip over it one night on her way to the toilet. She will lie fractured on the cold tile floor, bent like Kertész’s Satiric Dancer.* The egg man she never thought to tip will be the first to notice the accumulation of newspapers. The Cinnamon Trust will care for the yappy dog in perpetuity, though they will regret the commitment.

But today, she marches around the yard of her cottage far from town’s bustle and crowd. She snips at the air with grass shears, determined to clip the verdant bloom sprouting from her bulldog’s backside. Daughter Sylvie’s feeling poorly, needs the iron-rich foliage growing there to reduce her ghostly pallor. The bulldog gathers sinew and bone, plans a death-feigning trick to evade the blades. He’ll keel over sideways, stiff as a board, shelter inside his own shadow. Last spring, to avoid another trim, he burst through a hedge, leaving a tunnel that has not yet branched in.

In three years, Sylvie will ponder the death of her mother. Alone in her city flat, surmising her own likely demise, Sylvie will sink into some other opening, grope for the edge of the vacuum, start a furious rocking. In a week, she will jostle her limbs, breach her mind’s bleak black ocean and scissor kick, glistening with spume, towards a fierce knocking on the door. She will open it just a crack, discover milk bottles erect as Hungarian revolutionaries, meant for the woman in 37-C, three You’re Late! notices fluttering pink on the floor.

“Fugue” is ekphrastic, after a photograph that was given to me in the late 1980s when I was in art school in London. An elderly friend at the time, probably very long gone by now, had but one picture of her long-deceased mother and asked me if I could reproduce it for her. Not only did I give her a number of larger B&W copies for herself and other family members, but I became obsessed with it, printing off a score of variations. One permutation was in a student show. Recently, I tried my hand at writing this story about it.

Additional works by Kertész may also be viewed at Holden Luntz Gallery.