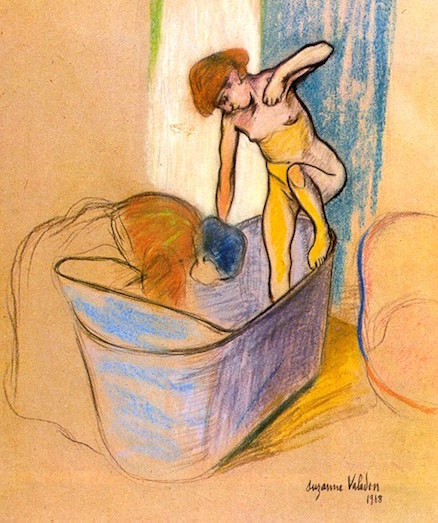 Soon, with a noise like tambourines,
Came her attendant Byzantines.
—Wallace Stevens[2]


Stevens lectures us on lust in his poem “Peter Quince at the Clavier,” specifically in those passages reflecting on the Book of Daniel concerning Susanna’s nakedness in her bath and the lust of the Elders of Babylon. In the natural sphere nakedness is ordinary, any lust that arises (if we can even call it that) being merely animal and instinctual. But bathing, like painting, is not a natural thing and requires a deliberate nudity, something always just a little more naked.[3]

1. The Bath (Le Bain) (pastel on paper, 1908) by Suzanne Valadon (1865–1938) is housed at the Musée des Beaux-Arts in Grenoble. Image above was reproduced from the public domain via Wikimedia:
https://commons.wikimedia.org/wiki/File:ValadonSuzanne_TheBath.jpg

3. John Berger, in Ways of Seeing (British Broadcasting Corporation and Penguin Books, 1972): “To be naked is to be oneself. To be nude is to be seen naked by others and yet not recognized for oneself. A naked body has to be seen as an object in order to become a nude...” (page 54).


For more about Valadon and her work, see Model, Rebel, and Painter, Suzanne Valadon Defied the Odds, a review by Ilene Dube (24 October 2021) in Hyperallergic (independent arts journalism).

is a retired university professor of political theory who lives in Old Saybrook, Connecticut with his wife, Ann Knickerbocker (an abstract painter), and a Standard Poodle named Nikki. He is the author of three books of prosimetra published by KYSO Flash Press: Touching Fire: New and Selected Ekphrastic Prosimetra (2018), Get Up and Dance (2019), and Carmody & Blight: The Dialogues (2019).

His most recent book, Peaches and Roses: Episodes in the Navajo Degradation, was released in January 2021 by Silver Bow Publishing (New Westminster, British Columbia). He also has a poetry e-chapbook published in the 2River series, La Vida de Piedra y de Palabra: Improvisations on Pablo Neruda’s Macchu Picchu; an experimental prosimetrum in Lacuna entitled Five Episodes in the Navajo Degradation; “The Rock in a Jar,” an extended prose poem in several parts in Gone Law 32; and “The Turn of Art,” a short prosimetrical drama pitting Picasso against Matisse, in Fiction International.

⚡ Artifact With Steam (2019) by Ann Knickerbocker, ekphrastic tanka prose in the e-collection Get Up and Dance featured in KYSO Flash (Issue 12, Summer 2019)