Poem by Gary S. Rosin, and
Photograph by Nicole Barge 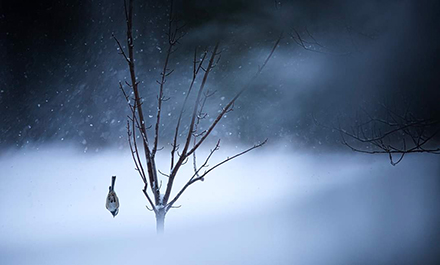 Copyrighted © by Nicole Barge. All rights reserved.
Image appears here with her permission.

Photograph was posted by the artist to her Facebook page on 18 January 2021 with this caption: “Mésange suicidaire! St-Narcisse, Québec, le 16 janvier 2021.”

French by origin and Canadian by adoption, Nicole Barge discovered photography when very young, and it has been part of her life for more than 50 years. She enjoys nature photography and prefers poetic, ethereal images, or particular atmospheres and lights such as chiaroscuro, color harmony. Self-taught, she works with Canon equipment and gives workshops in macro photography for members of a photo club she co-founded in France.

Her work appears in several publications: Image et Nature (France), Savoir tout faire en photographie (France), Photo-Solution (Quebec), and DSLR Photography (UK), and has been exhibited solo at the College Photo Gosselin in Quebec. Collective exhibits include: with her photo club; at the contemporary space of Quebec (art gallery); and twice at the Dorion-Coulombe house.