Madonna With the Long Neck 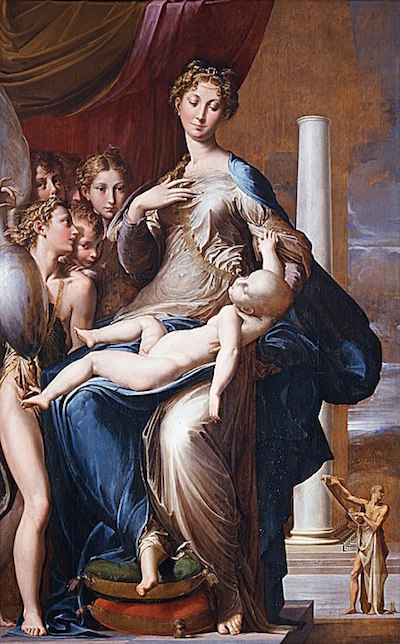 The oil-on-wood painting above is also known as Madonna and Long Child With Angels and St. Jerome, and depicts the Madonna and Child with angels. Begun in 1534 for the funerary chapel of Francesco Tagliaferri, the painting remained unfinished upon Parmigianino’s death in 1540. Ferdinando de’ Medici (1663–1713), Grand Prince of Tuscany, purchased the painting in 1698, and it has been on display at the Uffizi art museum in Florence since 1948.

Image above was downloaded on 22 September 2021 from the public domain via Wikipedia.

poems have appeared in Rattle, Nimrod, North American Review, Slant, American Journal of Poetry, and many other journals and anthologies. Her fifth book will be published in 2022. She has been an Associate Editor for Good Works Review and has been nominated for Best of the Net and the Pushcart Prize. She likes the light on November afternoons, the music of Stravinsky, the smell of the ocean. She hates pretense, fundamentalism, and sauerkraut.