I don’t know who I am now. I removed the only ring that united me to you. I removed your three-year-old pillowcase I slept next to. It doesn’t smell of you anymore. Your shirt and belt still hang in our bedroom as you left them. In case you come back. You, who were with me the night you left.

A wife is what I was: in love. And a writer, a dreamer, a mother, a friend, a sister. I have been drained. No battery recharging inside me. The signal is dim.

I fight with every morning light. I don’t want to remove the covers. Instead, I want to feel the darkness embrace me in broad daylight. I don’t have to report to anyone. It’s so easy to slip away even in front of caring people’s eyes.

Silence flows in this house, the house of what was. Our daily routines, our disagreements, our lovemaking, you hugging me by the kitchen counter while coffee percolated. Kissing me inside the curve of my neck gave me goose bumps and made me giggle.

Alone a few weeks after you left, I lay down at the bottom of the white marble steps that lead downstairs from our bedroom. I tried to position myself as I had found you that dawn lying in a thick pool of your own raw-smelling blood. You looked like you were diving into the Aegean with your arms stretched straight behind you. I looked up the stairs from the floor, trying to imagine what had happened to you while I was sleeping. I will never know.

I noticed drops of dried blood under the lip of the steps but didn’t tell anyone. It’s my secret. Taking a damp white paper napkin, I held it over each drop until it was absorbed. I worked my way up, searching under each lip of marble step until I caught every drop of you. The napkin had turned rust-red and I carefully placed it on the counter to dry. Later, I put the dried napkin in a plastic bag and tucked it into my drawer. Your last remains.

I still drive up to the cemetery in disbelief. Two days after Christmas I visit in case you thought I forgot about you during the holidays. I never know what to do there. I sit by your feet and stare at the stones that make up your temporary home.

Three years is all they give you in Greece. The municipality sent me the letter a few days ago which explained I must pay 40 euros for exhumation and 20 euros for the metal box they will put your bones in. I can take the box to the island of my ancestors so you could be close to me while I still live. Or I could take you up North to Thermi where your ancestors are from. You once told me you wanted to be buried up there. I will end up in the sun-scorched cemetery in Apikia. Our bones will be far apart from each other after my death.

I stare at your headstone. I want to rip the earth open with my bare fingers and lie down next to you. I want your hug. Did I kiss you good-night that last night? I don’t remember.

I was not finished loving you. 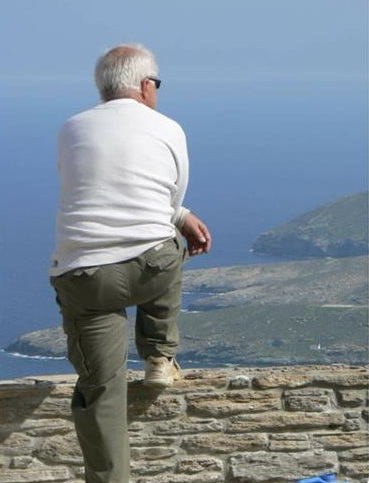 As far as burial spots go, they gave you a good one on this hill. Maybe the gravediggers sensed you loved to sail and wanted you to have a perfect view of the sea. Tankers hang lazily in the water glistening in the reflected sun of early evening. The cemetery’s gates will close soon. Part of me wants to get locked inside so I can’t leave you. The rest of me shivers in the cold.

To keep you warm, I poured many heavy bags of river pebbles to cover the earth above you. They’ve sunk into the dirt already. I read the names carved in marble as far as I can see surrounding you and calculate their ages. This one at least lived to his 80s, and that one to her nineties. You were still young. And we had plans.

I have no white marble grave for you, no photos or flowerpots or oil lamp of polished brass to display as I see on other plots here. Instead, I use the broken lamp the undertaker gave me the day we buried you. It does the job. Bringing olive oil, wicks, and a lighter, I do my best to take part in a widow’s complicated ritual. The flame I light is only a small beacon back to you.

Where have you gone? I have lost my bearings and can no longer feel you. The terrified heart beating in my ears knows I might stay lost forever. Our friends try to be kind and say that’s not what you would have wanted. What do you want for me? You gave me your life, but then let go and pushed me out of our nest.

Your silence urges me away, back to the city below. Signs on the narrow road warn of sharp curves and disaster. I could topple and fall over the edge. Leaving you behind, I hear you whisper goodbye.

I am a hungry woman not done living.

The energy inside me is shifting. So now I get to say it: your death was not my death. Your death was the end of our journey together. Lately I have heard my own laughter. Birds do sing.

I have stumbled through another Christmas, another New Year’s Eve. But you have given me a present. You have slipped away from me as husband and urge me to glide on without you. Can I trust myself? Memories of you swirl around me on this icy winter night. You will dance with me again when moody Meltemi winds caress me in summer. Always dance with me.

The snapshot above is copyrighted by the author, Amalia Melis, and shows her beloved departed husband, Argyris, looking out to sea from the patio of their house on Andros, Greece; image is reproduced here with author’s permission.

is a journalist, essayist, and fiction writer who was born and raised in New York. She is the founder and organizer of the Aegean Arts Circle writing workshops held in Andros, Greece each summer since 2003.

Her writing has been published in Glimmer Train, Guernica, Elle, Ms., Michigan Quarterly Review, and KYSO Flash, as well as in Ducts Magazine, Hunterdon County Democrat, Leaders, National Public Television, Palm Beach Post, Poet & Critic, Sojourner, The ART Magazine, and The Melbourne Age Newspaper, among others. She has published interviews with two Pulitzer Prize-winning authors, Michael Cunningham and Frank McCourt. “Immigrant Daughter,” her first short story, won second place in Glimmer Train’s Short Story Award for New Writers in 2002, and two of her other stories were finalists in 2005 and 2007. Her first novel is available for publication, and she’s at work on a hybrid lyrical non-fiction book about loss.

Amalia is also an artist, whose assemblage sculptures have appeared in group art exhibits in the U.S., Germany, and Greece.